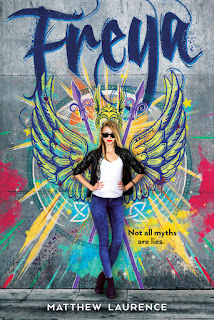 There's far more to Sara Vanadi than meets the eye. In her prime, she was Freya, the Norse goddess of love, beauty, war, and death - though that past hardly seems to matter now. For an ancient goddess in the 21st century, true believers - and the strength they bring - are painfully hard to find. But when a new, rising power threatens to remake the world by bending the divine to its will, Sara realizes her days of hiding have ended, and a chance to claw her way out of the history books has arrived. She'll just need new clothes and a manicure before she gets started.

Freya had all the promise to be interesting, to be all about a goddess on the run, but it didn't work for me.

Sara is interesting when you think of her as Freya, as a Norse goddess who's been hiding out in a mental institution because the people there will believe her, which gives her a modicum of power. As a goddess who's on the run and trying o keep an evil corporation from either enslaving her or killing her. As a goddess willing to fight back against evil and save others who fell for chance to be believed in again. But then there were times when she'd use her powers to steal money, to shop for new clothes, to get a job.

I really wanted to like this, I was looking forward to reading about gods trying to survive in the modern world, but this didn't turn out how I thought it would. I think I was expecting something dark and serious. This felt more upbeat and commercial, more easy, and, at the start, all about a pretty blonde girl using her charm in order to get what she wanted. To be fair, it does get rather dangerous near the end, and Sara does spend a fair amount of time trying to take down the evil corporation. I imagine some will enjoy this, will look forward to more considering the ending was left rather open, but it just fell flat for me.