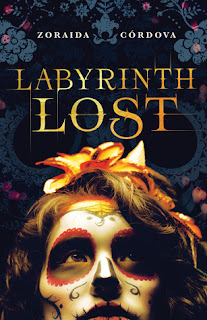 Nothing says Happy Birthday like summoning the spirits of your dead relatives.

I fall to my knees. Shattered glass, melted candles and the outline of scorched feathers are all that surround me. Every single person who was in my house – my entire family — is gone.

Alex is a bruja, the most powerful witch in a generation…and she hates magic. At her Deathday celebration, Alex performs a spell to rid herself of her power. But it backfires. Her whole family vanishes into thin air, leaving her alone with Nova, a brujo boy she can’t trust. A boy whose intentions are as dark as the strange markings on his skin.

The only way to get her family back is to travel with Nova to Los Lagos, a land in-between, as dark as Limbo and as strange as Wonderland…

Beautiful Creatures meets Daughter of Smoke and Bone with an infusion of Latin American tradition in this highly original fantasy adventure.

Once again, another cover that I knew I'd show off once it was revealed. The cover looks like it fits so much with the story, with Alex's expression, her looking up, and the Latin American traditions and days like El Dia de Los Muertos. It sounds like it's going to be about magic and family and complicated things and I'm so on board for all of it. :)
Posted by Lindsay at 12:02 AM