Me on Exit, Pursued by a Bear 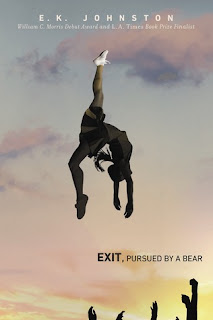 Hermione Winters is captain of her cheerleading team, and in tiny Palermo Heights, this doesn't mean what you think it means. At PHHS, the cheerleaders don't cheer for the sports teams; they are the sports team—the pride and joy of a tiny town. The team's summer training camp is Hermione's last and marks the beginning of the end of… she's not sure what. She does know this season could make her a legend. But during a camp party, someone slips something in her drink. And it all goes black. In every class, there's a star cheerleader and pariah pregnant girl. They're never supposed to be the same person. Hermione struggles to regain the control she's always had and faces a wrenching decision about how to move on. The assault wasn't the beginning of Hermione Winter's story and she's not going to let it be the end. She won't be anyone's cautionary tale.

Exit, Pursued by a Bear is a book that shows the strength of girls after they are raped, the ways they fight back and live their lives after the assault, and the way one girl refuses to be a cautionary tale for those who will follow her.

Hermione is smart, personable, and kind. The kind of supportive girl you want in your corner, the kind of girl who you want to be in their corner. She's strong, focused, and looks at certain things with questions in her eyes. She wonders what her light year of high school will be like, where she'll be after graduating. She wonders why her boyfriend acts the way he does, a little presumptuous and a little more jealous. She wonders about cheerleading, how far the team will go in terms of competition over the school year. Then she's assaulted, drugged and raped and left cast aside. But she refuses to let the assault define her.

Hermione has to fight to regain her agency, from those in her life, from those she doesn't know. Which feels strange to her. Yes, she was raped. She doesn't deny it. But that doesn't mean she's suddenly a different person, that she's no longer who she was. She refuses to be treated any differently, to be seen as a warning, a story to tell others. Before the rape, she was Hermione Winters. After the rape, she remains Hermione Winters. No one will take that from her.

There's a support structure here not often seen in stories about rape and assault, not to this extent. There are so many here that support her choices, her decisions, her requests that she not be treated as a cautionary tale. Her best friend Polly. Her parents. The girls and boys on the cheerleading team. The police officer who handles her case. The therapist that drives two hours to meet with her once a week. The cheerleading coach. Not every rape and assault victim will have this kind of support, the kind of access to police, health care, and abortion services that Hermione does. This is one story about one girl. No two stories will be exactly the same.

As optimistic as this story is, it's still an honest story about what happens to a teenage girl before and after she is raped. In 2015, All the Rage by Courtney Summers highlighted the anger that some girls are filled with after they are raped, the shields they put up around them. The fear that fills them. The harm that victim blaming does. Both books push back at rape culture, at victim blaming. But both books tell different stories. Romy and Hermione are not the same girl. Their experiences pre- and post-rape are rather different, which is good. There is no one way to be raped, to be a victim of rape, to react after being raped, and to live your life in the days, weeks, months that follow. Once again, E.K. Johnston gives readers a heroine who refuses to be anyone but herself.