Me on A School for Unusual Girls 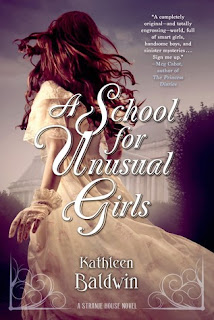 It's 1814. Napoleon is exiled on Elba. Europe is in shambles. Britain is at war on four fronts. And Stranje House, a School for Unusual Girls, has become one of Regency England's dark little secrets. The daughters of the beau monde who don't fit high society's constrictive mold are banished to Stranje House to be reformed into marriageable young ladies. Or so their parents think. In truth, Headmistress Emma Stranje, the original unusual girl, has plans for the young ladies—plans that entangle the girls in the dangerous world of spies, diplomacy, and war. After accidentally setting her father's stables on fire while performing a scientific experiment, Miss Georgiana Fitzwilliam is sent to Stranje House. But Georgie has no intention of being turned into a simpering, pudding-headed, marriageable miss. She plans to escape as soon as possible—until she meets Lord Sebastian Wyatt. Thrust together in a desperate mission to invent a new invisible ink for the English war effort, Georgie and Sebastian must find a way to work together without losing their heads—or their hearts...

A School for Unusual Girls is intriguing and mysterious, an introduction to a group of misfit girls who spend their days learning how to uncover secrets and escape dangerous traps. But the danger is closer than they think.

Georgiana is intelligent, scientific. She's been left broken by unfeeling parents who think she's wasting her life with books and experiments. She's a rare girl for the time period and for the upper class: she's not interested in balls or afternoon teas and she doesn't put much weight on finding a rich, titled husband. She's a practical girl, and so she's constantly tossed aside. But at Miss Emma Stranje's school for young ladies who are a bit too hard to handle, she finds herself. It's there that Georgie learns the truth about the school, about the girls. About herself. That her practicality and scientific leanings are greatly desired. At the beginning, when she fears the school, it's because she doesn't understand why she's there. She doesn't know what her opinion of herself, coated in fear and embarrassment, will change. Georgie won't have to worry about being ridiculed and scolded by her parents anymore. Someone will find her interesting.

The school is a very curious school. It would have to operate under the radar, discreetly, under the noses of society, because young women would've had little freedom to act on their interest and desires of they strayed from the 'common' or 'normal' ones that most proper young ladies had. The girls of Stranje House were sent there because they fell outside the norm and their families either didn't know what to do with them or wanted to be rid of them because they didn't understand them. It's disheartening, but the girls have finally found a place for themselves.

The book left me intrigued as the plot took a rather interesting turn near the end, changing from a historical novel to an alternate history novel. Anything is possible as one might've already guessed after meeting the different young women of Stranje House, but it's especially so now. I was annoyed at how the true purpose of the school wasn't explained to Georgie nearer to the beginning, saving her from panicking and constantly yelling at everyone. They purposely held off on telling her, which seemed foolish. It didn't seem like they enjoyed having her shout at them that she didn't understand what was going on. With how the book ends I'm curious as to what might happen next, especially since it looks like a different girl will be the narrator. I would recommend this to those looking for intelligent girls operating outside society's borders, and secrets and spies.