Me on The Death and Life of Zebulon Finch, Volume One 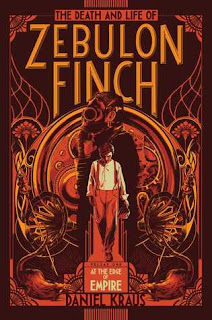 May 7, 1896. Dusk. A swaggering seventeen-year-old gangster named Zebulon Finch is gunned down on the shores of Lake Michigan. But after mere minutes in the void, he is mysteriously resurrected. His second life will be nothing like his first. Zebulon's new existence begins as a sideshow attraction in a traveling medicine show. From there, he will be poked and prodded by a scientist obsessed with mastering the secrets of death. He will fight in the trenches of World War I. He will run from his nightmares—and from poverty—in Depression-era New York City. And he will become the companion of the most beautiful woman in Hollywood. Love, hate, hope, and horror—Zebulon finds them. But will he ever find redemption?

The Life and Death of Zebulon Finch, Volume One is the start of an epic story, a look back at beginnings. At the first lifetime that crafted Zebulon Finch and the second that showed him all the horrors and delights of the world.

Zebulon is reflective and bold, not necessarily all that boastful. There are many words he wishes to share with his readers, which makes him a pensive and witty narrator. His tales are full of intricate details, from his childhood in Chicago with his controlling mother, to his time as a member of a gang, to his death and subsequent awakening. To his afterlife full of charlatans and criminals, villains and heroes, people desperate for money or desperate for fame. Or desperate for life. From America to Europe and back again. He wanders through space and time, experiencing, learning. Decaying. Because, with all his adventures and stories, Zebulon Finch is still dead.

It's a curious story with a voice keen to describing every single detail of what occurred to him and around him during his time as a resurrected young man. It's almost 700 pages of description, narration, and reflection on how cruel he once was, how clueless he was, how jaded he was, how battered he was, how smart he was, and how reminiscent he's become.

The idea of this story is intriguing, very intriguing, but I struggled with the overall length of the story. Zebulon has had more than 100 years to ponder life, to wonder about peoples' motivation for their actions. To think about why him, why didn't he die. It's a dark story full of wit and adventure, but it's just so long. If you think you can handle the length, if you are interested in Zebulon's journey from Chicago to Georgia to Boston to France to New York to Hollywood, if you're interested in the story of a dead man discovering what it is to be alive and human, then give this a read.