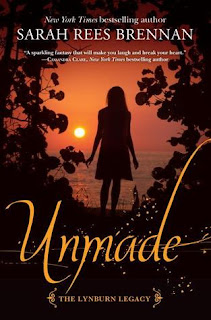 Kami has lost the boy she loves, is tied to a boy she does not, and faces an enemy more powerful than ever before. With Jared missing for months and presumed dead, Kami must rely on her new magical link with Ash for the strength to face the evil spreading through her town. Rob Lynburn is now the master of Sorry-in-the-Vale, and he demands a death. Kami will use every tool at her disposal to stop him. Together with Rusty, Angela, and Holly, she uncovers a secret that might be the key to saving the town. But with knowledge comes responsibility—and a painful choice. A choice that will risk not only Kami's life, but also the lives of those she loves most.

Unmade is the conclusion to a trilogy full of magic and secrets, of mystery, of deception and lies and evil. The time has come, the time to stand up against the evil sweeping through this small town, but will anyone survive it?

Kami is battered and bruised, torn to pieces, but somehow she pushes forward with her mission to defeat Rob Lynburn, to save Sorry-in-the-Vale from the sorcerers hellbent on controlling it with fear and death. Ever since she broke the link, ever since Jared was taken from her, Kami's been missing a part of herself. She still tries to stay positive and search for clues, still promising the best while battling back against the worst, but it's taking its toll. It's all about survival now, survival and discovering the one thing that could save them. As deadly as it could be.

Even more of the bizarre family dynamics with Jared, Ash, and Lillian. They're the most dysfunctional family, especially when Rob and Rosalind are included. They have different goals, different evils they've committed. But when it comes to Jared, Ash, and Lillian, their loyalties are mostly the same. They have each other, they have the town. They have people like Kami, Angela, Rusty, and Holly to support them. They just have to let them in, by which I mean Lillian needs to calm down and admit that she can be wrong at times.

This series captures the perfect combination of magical mystery, devastation, heartbreak, and clever banter. While the town crumbles, while the sorcerers fight back, while people are harmed and kidnapped, while Kami and her friends search graves and deep, dangerous places for clues, there's still time for snappy one-liners, Because there's always time for levity. And awesome friendships. And kissing. This is a great series for fans of sleepy towns with secrets, girl detectives, brooding boys, and a spot of danger or two. Or a dozen.