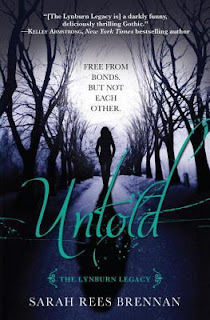 On the surface, Sorry-in-the-Vale is a sleepy little town. But Kami Glass knows the truth. Sorry-in-the-Vale is full of magic. In the old days, the Lynburn family ruled with fear, terrifying the people into submission by killing human sacrifices for blood and power. Now the Lynburns are back, and Rob Lynburn is gathering sorcerers so the town can return to the old ways. But Rob and his followers aren't the only sorcerers around. The town must make a decision: pay the blood sacrifice, or fight. For Kami, this means more than just choosing between good and evil. With her link to Jared Lynburn severed, she's now free to love whomever she chooses. But who should that be?

Kami is intelligent, driven, inquisitive, and determined. Now that she knows the truth of Sorry-in-the-Vale, that evil sorcerers are set on ruling it, she needs to get the word out. Luckily she has awesome friends like Angela, Rusty, and maybe Holly, but she needs more. If only Lillian Lynburn, known sorcerer and fighting back against the evil ones, would give her the time of day and let her help. If only she knew who else to trust because some of the evil ones might be important people. If only she wasn't so conflicted when it came to Jared, the guy she once thought was just a voice in her head who turned out to be real and brooding. After breaking the link, everything's awkward with Jared. Now Kami has to rely on her own instincts. But will Jared still help? Will he hate her?

The Lynburns are a complicated bunch. Jared has his denial and his anger, his refusal to have anything to do with his uncle's evil plans, but he has his sore spots when it comes to Kami. Ash is full of fear and indecision, of worry. His dreams of being a happy family were crushed when his father committed murder. He knows he's trained more than Jared, but Ash keeps getting pushed aside by Lillian. He's seen as weak. Unique family dynamics abound, even more so that usual because of all the magic and the murder.

Power, greed, desire. They all fuel Rob Lynburn, his desire to rule the town and its people with a magical fist. But not all in his family feel the same way. A battle between the sides is coming and Sorry-in-the-Vale stands in the middle.

This book is despair and darkness and danger mixed with clever wit and humour. It's layered with mystery and realistic characters full of homes and dreams and motives, mistakes and flaws. It's enthralling and enchanting and exciting. It's complicated. And it certainly ends with a punch to the face for the reader.