Me on Rain Reign 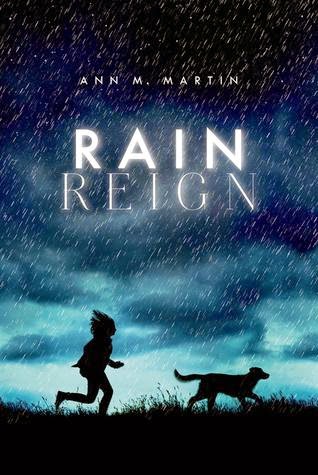 Rose Howard has OCD, Asperger's syndrome, and an obsession with homonyms (even her name is a homonym). She gave her dog Rain a name with two homonyms (reign, rein), which, according to Rose's rules of homonyms, is very special. Rain was a lost dog Rose's father brought home. Rose and Rain are practically inseparable. And they are often home alone, as Rose’s father spends most evenings at a bar, and doesn't have much patience for his special-needs daughter. Just as a storm hits town, Rain goes missing. Rose's father shouldn't have let Rain out. Now Rose has to find her dog, even if it means leaving her routines and safe places to search.

Rain Reign is insightful and emotional, and at times melancholy. This is the story of a smart young girl and how she sees the world before, during, and after the disappearance of her beloved dog.

Rose is a very intriguing narrator. Now, I can't speak as an authority on children with Asperger's/autism or OCD (even though I did once work as a behavoural interventionist), but Rose's voice sounds very authentic. She sounds very matter of fact, a young girl without guile or artifice, unable to lie or pick up on subtle clues in certain social situations. She has her routines, her preferences, her likes and dislikes. She has her meltdowns and her struggles. But throughout the story she grows, she learns, and that's what's important.

It's easy to support Rose, given her relationship with her father. It's not that he's given up, but he's very much a man who doesn't understand and, to be honest, doesn't want to understand Rose's diagnosis. He sees it as her just not paying attention, her acting out, when it's not. Telling her to stop won't make it better and he refuses to try another method. It makes me wonder if the departure of his wife and Rose's mother left him depressed.

Before I read this I thought back to when I was a kid and devoured the Babysitters Club books, and I wondered if I'd be able to separate the two. But then Rose completely took over and her story filled my mind. This is her story and she shines in it. A definite must read for kids and parents alike and for those who enjoy unique characters.