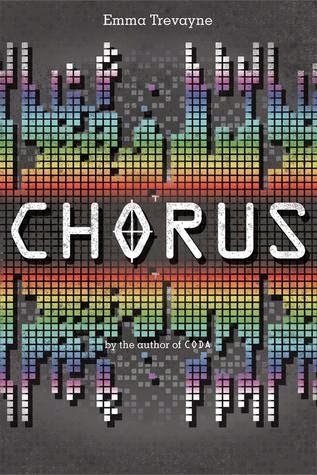 The dream is all white from a memory that is too real, and its melody has continued to haunt Alpha, even though she has moved as far away from temptation as possible. Eight years after she was exposed to her first and only addictive musical track from the Corp, Alpha has established a new life with a band of her own in a city that has given her the space she was seeking, Los Angeles. However, it only takes one urgent call to bring Alpha back home to Anthem, the older brother who raised her as well as a revolution, and Omega, her twin brother whose contrasting personality makes her feel whole. As Alpha spends more time in the Web, she notices that the number of people who look sickly and addicted seems to be rising. With Anthem's health declining, Alpha and her friends will have to dig deeper into the mainframe than ever before in order to find the root of the Corp's re-emergence.

Chorus is a return to an enhanced future with secrets still lurking in the shadows. After the rebellion, after the revolution, the Web became a better place to live for Alpha and her brothers. But something has returned.

Alpha is her own person. She's finally comfortable with life, with living in Los Angeles by the beach. Away from the Web. But the Web is like a web. It can trap you, surround you, make it impossible for anyone to escape. Alpha has to find the strength to fight back with everything around her begins to crumble, and the strength to share the truth of what happened to her and Omega when they were children. I like Alpha, she's strong and dedicated. But she takes on too much. She keeps her own problems hidden away, buried deep where they only cause more problems. She doesn't share them in order to keep everyone safe, but she needs to if they want to get through this new crisis.

Power is addictive and insidious. In Coda, the Corp was everything. It controlled everyone, and Anthem brought it down. But pieces of it would always remain, waiting for the right moment, that perfect second in time that would allow it to rise up again and regain what was once theirs.

As with the first book, music is the backbone of this story. It's the message, the vessel, the drug and the cure. It's about what music does to us as human beings. How it lifts us up, how it breaks us into pieces. How it lets us express ourselves to those close to us, to those we've never met before. It gives us the chance to share hopes, dreams, thoughts, fears. It fuels us. And the Corp attempts to abuse it in the worst way possible.

As the titles implies, this is the chorus, the repetition. It suggests a cycle that exists in the world. Freedom, subjugation, rebellion, and back to freedom. It suggests that it will happen again and again, that there will always be  those who risk everything, even themselves, to save the world. It suggests that someone will have to make that sacrifice every time a force rises up in an attempt to exert control over the general population. It's a bit dismal, but it's honest. Things happen in waves, war and peace. There will be sorrow, but at the same time there will always be hope.