Me on The Iron Trial 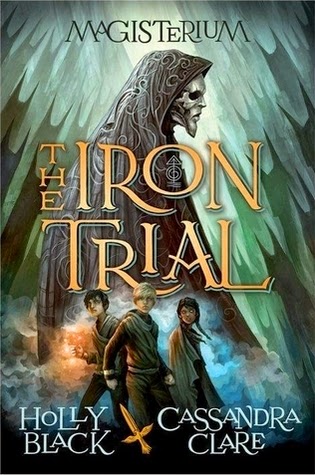 Most kids would do anything to pass the Iron Trial. Not Callum Hunt. He wants to fail. All his life, Call has been warned by his father to stay away from magic. If he succeeds at the Iron Trial and is admitted into the Magisterium, he is sure it can only mean bad things for him. So he tries his best to do his worst - and fails at failing. Now the Magisterium awaits him. It's a place that's both sensational and sinister, with dark ties to his past and a twisty path to his future. The Iron Trial is just the beginning, for the biggest test is still to come...

The Iron Trial is mysterious, magical, and dangerous. This is the beginning of a young boy's journey through magic, fate, and learning the secrets that have been kept from him. The secrets that have the power to change everything he thought he knew about himself.

Callum is an interesting main character. He's a little harsh, a little bitter, and he's full of sarcasm. Not an always looking on the bright side of life kind of 12-year-old, but I like that. It has the look of a dark and dangerous series and his attitude fits. And the different personalities of Tamara and Aaron, the girl under pressure from her parents to achieve greatness and the boy with a smile on his face and only sadness in his past. The three of them form a unique group, different pasts and different motivations. It looks like they'll work well together.

There are a number of questions left unanswered, which was to be expected. This is the first in a five book series. Nothing is really going to be solved in this book. There's an introduction to Call, to the Magisterium, to the magic that exists, to the enemy they battle, to the fellow students that are bound to become Call's closest friends. And there's a truth revealed that I certainly hadn't expected.

Now, I've seen a lot of comparisons to Harry Potter in regards to this book, both positive and negative. You could also compare this to any other middle grade series about a 12-year-old with magical powers searching for the truth about who he really is. So try and set aside those comparisons as you read this.

As the series goes on, I have to wonder at what else will be revealed. Revealed to Call, revealed to his friends and fellow apprentices. Revealed to the Magisterium. What the truth really is behind the war with the Enemy of Death.