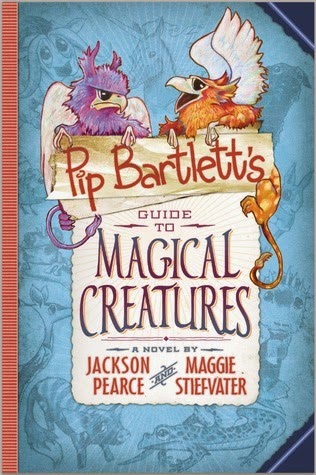 Pip is a girl who can talk to magical creatures. Her aunt is a vet for magical creatures. And her new friend Tomas is allergic to most magical creatures. When things go amok—and they often go amok—Pip consults Jeffrey Higgleston’s Guide to Magical Creatures, a reference work that Pip finds herself constantly amending. Because dealing with magical creatures like unicorns, griffins, and fuzzles doesn’t just require book knowledge—it requires hands-on experience and thinking on your feet. For example, when fuzzles (which have an awful habit of bursting into flame when they’re agitated) invade your town, it’s not enough to know what the fuzzles are—Pip and Tomas also must trace the fuzzles’ agitation to its source, and in doing so, save the whole town.

It's not often I find myself gushing over or being totally desperate for middle grade, but I'm really looking forward to this. Jackson and Maggie words, Maggie artwork. Magical creatures. *packs suitcase* I am so onboard for this.
Posted by Lindsay at 12:02 AM