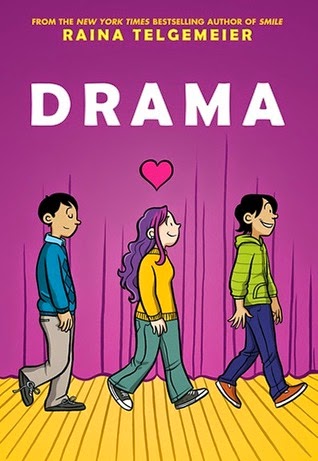 Callie loves theater. And while she would totally try out for her middle school's production of Moon Over Mississippi, she can't really sing. Instead she's the set designer for the drama department stage crew, and this year she's determined to create a set worthy of Broadway on a middle-school budget. But how can she, when she doesn't know much about carpentry, ticket sales are down, and the crew members are having trouble working together? Not to mention the onstage AND offstage drama that occurs once the actors are chosen. And when two cute brothers enter the picture, things get even crazier!

Drama is funny and sweet, a wonderfully drawn and told story. It's an entertaining look at friendship, young love, crushes, and what goes on backstage during a middle school theatre production. No matter what's going on, onstage or offstage, there's bound to be drama.

Callie is kind, creative, smart. She's so excited about being part of the stage crew, she's got so many ideas on how it could be the best production ever. But like any kid with ideas, like any person in general with ideas and hopes and dreams, she's stuck because of that tunnel-vision. She can only see what she's aiming for, gathering in the people and things around her, when looking at the bigger picture might be better. But that's what happens when you're a kid, when you're devoted 24/7 to something and you want the world to see it. Obstacles? Challenges? Drama? Everything will work out. Until it doesn't.

What's fun and interesting about this book is as much as it's about Callie and her ideas, it's about her and her relationships with her friends and family. Being friends, having crushes, getting nervous around boys and girls, not understanding their actions and decisions when they sort of ruin things. At this age, it's all one big mess of hope, excitement, and developing hormones. And it's all anchored by Raina's bright, clear, realistic artwork.

Rare in middle grade fiction is the book that includes and semi-focuses LGBTQ characters. But why is that? There are coming out stories told by people who knew when they were young that they were gay. It's not something you realize when you hit high school or college. So why aren't there more middle grade books for those kids who are starting to realize they don't have crushes on kids of the opposite gender? Or that they have crushes on both? It's a bit easy for the kids in this book, they aren't hated or avoided because it's discovered that they're gay. Sometimes it is, sometimes the people close to you accept it and continue on, but other times it's not that simple. It's far more painful and frightening.

There's something about this book that screams fun and excitement. There are hard times, yes. Nothing is perfect. There were bound to be fires to put out. Just look at the title.