Me on Stitching Snow 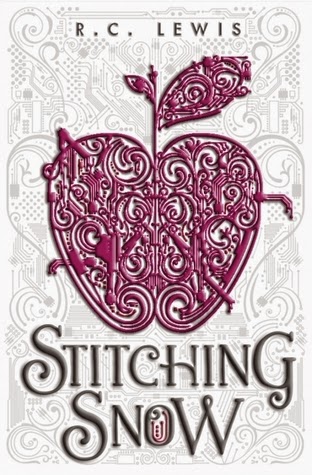 Princess Snow is missing. Her home planet is filled with violence and corruption at the hands of King Matthias and his wife as they attempt to punish her captors. The king will stop at nothing to get his beloved daughter back-but that's assuming she wants to return at all. Essie has grown used to being cold. Temperatures on the planet Thanda are always sub-zero, and she fills her days with coding and repairs for the seven loyal drones that run the local mines. When a mysterious young man named Dane crash-lands near her home, Essie agrees to help the pilot repair his ship. But soon she realizes that Dane's arrival was far from accidental, and she's pulled into the heart of a war she's risked everything to avoid.

Stitching Snow is an intriguing mystery all about a mysterious girl on a cold planet and the secrets in her past that can't stay hidden any longer. But she's torn between hiding and confronting those secrets, between keeping herself from reliving that pain and keeping the solar system from going to war.

Essie is a strong girl, a girl perfectly happy staying where she is and working hard. Doing battle in cage fights, showing tough men that she can take care of herself, repairing the drones that work in the mines. She has her reasons for fighting. She wants to make sure that the men know she can protect herself, that she can fight back, that she'll never be used or be a victim again. Which I have to applaud. She's not whining about being on Thanda. It's not the best place to be, but she's carved out her own little spot, she's proved she can survive. She has a place where she can be safe. But then Dane crashes nearby and ruins everything.

I don't usually elaborate on the romance unless it's a love triangle that I thought was done well (or not), but this is an exception. There's no love triangle (unless it's between Essie, Dane, and Dimwit), but there is a moment that made me sit up and respect the romance. Essie and Dane, though mistake and circumstance and kidnapping, are drawn to each other. But they have bigger things to worry about, like saving innocent people. Like surviving. As much as they acknowledge that there's something there, that they might be getting too involved with each other, they understand that their budding romance isn't a priority. It was a mature, rather adult decision to make. And it's not ignored, it's always there, waiting for when they're not constantly looking over their shoulders.

There are hints and pieces of Snow White in this fairy tale retelling, but not so much that it felt like I was reading something too familiar. I can see where people are coming from when they compare it to Marissa Meyer's Cinder, but there are enough differences for me that I can enjoy them for different reasons. Cinder for discovering her past and her strength, Essie for confronting her past and unleashing her strength.

This book is part discovery, part self-discovery, and part journey to confront those monsters under the bed. It works well as a standalone and I'm satisfied with the ending. I imagine this will appear to fans of fairy tale retellings set in outer space and quirky robot companions.

(I received an e-galley of this title from Hachette Book Group Canada through NetGalley.)
Posted by Lindsay at 4:00 AM