Me on The Shadow's Curse 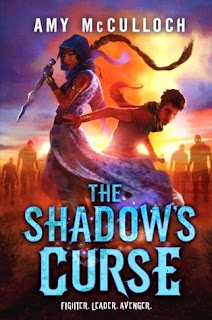 Raim is no closer to figuring out the meaning of the broken vow that sentenced him to exile for life. But with his former best friend now a tyrannical Khan who is holding the girl Raim loves captive, he finds it hard to care. Every day, he and Draikh learn more about their powers, but it quickly becomes clear that he will never be able to stop Khareh and free Wadi unless he can free himself from the ultimate taboo of his people. Reluctantly, Raim begins the long journey down to the dangerous South, to find the maker of his oath. In Khareh's camp, Wadi is more than capable of devising her own escape plan, but she's gradually realizing she might not want to. The more she learns about Khareh, the more confused she becomes. He's done unquestionably bad things, horrific even, but he's got big dreams for Darhan that might improve their dire situation. What's more, rumours of a Southern king massing an army to invade Darhan are slowly gaining ground. Only if the Northern tribes can come together under a single ruler will they have the strength to fight the South - but what if that ruler is an impulsive (albeit brilliant) young man, barely able to control his ever-growing power, and missing the one part of him that might keep him sane? Whoever conquers the desert, wins the war. And the secret to desert survival lies in Lazar, which is set to become the heart of a great battle once again.

The Shadow's Curse is the conclusion to an epic journey all about the struggle between following fate's path and forging your own. It's a magical tale of promises and spirits, fear and friendship, and the blistering heat of the desert.

Raim is on a mission to discover the truth about his broken oath and to stop his former best friend from slaughtering thousands in his quest to rule the world. He's very much an unintentional hero in his own mind. He never thought he would be a leader, a ruler. He knows what he wants. He wants his sister and grandfather to stay safe. He wants to rescue Wadi. He wants to stop Khareh. He wants to know the truth. But he keeps getting pushed further and further in order to complete someone else's plans.

Wadi is confined to Khareh's side because of reasons she can't control. She's trapped by circumstance and Khareh's own growing tyrannical leanings. Unlike the first book, here we see more of her, of her supportive and bold personality, her desire to see Raim and return to his side in order to help him, and also see more of Khareh. He is the other side of Raim's journey. The cruel leader who wants control over the desert, control over the continent. Over the world. I was torn because he doesn't abuse or torture Wadi, not physically. She's actually treated rather well, but I still didn't want to like him.

This is very much a journey to find oneself kind of book, a journey in order to discover our purpose in life. It feels rather Canadian, the prolonged journey across a trying, harsh landscape in order to find oneself. Fate and choice are intertwined. Is everything fated, already sees by prophets and set in stone? Or can we still make our own decisions? Are we still in control of our own destinies?

This is the story of one young man searching far and wide, over deserts and across the sea, in order to discover the truth about himself. On this journey he will discover his fated purpose when all he really wants is to live a comfortable, safe life with those he wants to protect and support. At the beginning of the duology, Raim never acts like he wants to be a hero, and here he's still humble and unassuming, even with Draikh at his side, but now he has to decide if he will actually step up and save everyone. A definite must-read for epic fantasy fans.

(I received a copy of this title from Random House Canada.)
Posted by Lindsay at 6:00 AM