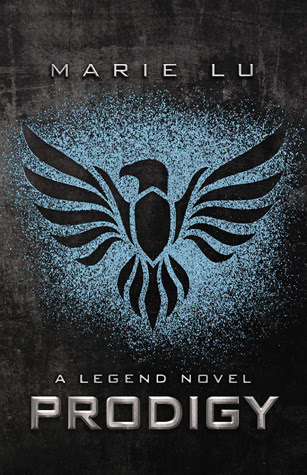 June and Day arrive in Vegas just as the unthinkable happens: the Elector Primo has died and his son Anden has taken his place. With the Republic edging closer to chaos, the two join a group of Patriot rebels eager to help day rescue his brother and offer passage to the Colonies. They have only one request: June and Day must assassinate the new Elector. It's their chance to change the nation. But June is conflicted, this Elector is nothing like his father, and she's afraid of the choice ahead. What if Anden is a new beginning? What if revolution must be more than loss and vengeance, anger and blood?

Prodigy is as complicated and harsh as Legend, continuing Day and June's uncovering of the Republic's true motives and what they have planned for their citizens. Now that they're together, now that they're fragile after what they just experience in L.A., they'll be split up for a new mission. The entire book is a test for June and Day, individually and together as a pair.

First came the explosion that was Day and June, first came the meeting, the realization for June that the Republic wasn't perfect, the realization for Day that he'd been used as a lab rat. Now comes the exploration, the tests of faith in their hopes and dreams of the future and of each other. Now separated, how will each of them act? They're hoping to survive, hoping they make the right choices, hoping they don't fail.

Both Day and June are interesting narrators. Both are prodigies in their own way, Day lived on the street for years and was able to protect both him and Tess, June knows tactics and strategy and is very calculating. But it must be said that they're still only fifteen. Remembering that makes them feel so young and vulnerable in a world so dangerous and decaying, but it also makes one wonder how quickly children and teenagers are growing up, if they're being stretched beyond their years.

There is a plot point or event that occurs in this book that I'm not a fan of, but I understand its use. Day and June need to be separated for the Patriots' plan to work, but I've never understood why an almost immediate separation in book two is a way to test the relationship first established in book one. There are other ways in which to test their relationship, but I understand why the author went this way. They need to figure out some things apart, they need to learn what's been kept from them, but that doesn't mean I need to like it all that much. My dislike of this plot device lessens as the pair spends less of the book apart.

So much happens in this book, so many things change, so many lives are threatened. Whatever comes next, whatever is coming for June and Day, will be the hardest.