Me on The Darkest Minds 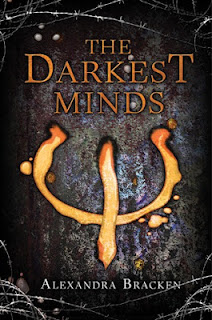 When Ruby woke up on her tenth birthday, she knew something had changed. Something that got her sent to Thurmond, a brutal "rehabilitation camp" run by the government. She might've survived the mysterious disease that killed most of America's children, but she and the others have emerged with something far worse: frightening abilities they cannot control. Now sixteen, Ruby is one of the dangerous ones. When the truth comes out, she barely escapes with her life. Now she's on the run and desperate to find a save haven for other kids like her called "East River." Once she's out, she ends up with another group of kids that broke out of their camp. Their leader, Liam, is falling hard for Ruby, but she can't risk anyone getting close. Not after what happened. Plus, there are other forces at work, those who will stop at nothing to use Ruby in their fight against the government, and they're not willing to let her go.

The Darkest Minds is a deadly and dangerous look at a crumbling future, a future where the children who weren't killed by a mysterious disease now possess psychic abilities that they cannot control. With this as the background, the reader is introduced to Ruby's journey to discover what she can do and how to live a normal life, if such a thing is possible.

The book heads straight into the story, straight into Ruby, and it felt a bit sudden and disjointed. It took a few pages to understand that the little back story on the disease was the only back story to appear at the start. Nothing on what Ruby and the other children were gathered up for, nothing on what's happened to the world. The reader is sent straight into Ruby's head where only a few things are known and so many questions on how she ended up at Thurmond.

More dystopian novels with characters that have paranormal abilities are popping up, and books like that can be hit or miss. It takes a lot for a dystopian to stand out in a (possibly) saturated market, and adding the paranormal is an attempt to make it stand out. This book reminded me at times of Partials, of Delirium, of Shatter Me, but I think Bracken has put a different enough spin on things to make this book stand out. There's a rather obvious military feel to the book, and the different kinds of characters are complicated and exciting enough to stand out.

The heart-pounding tension was kept up and continued through the book straight to the end. From where the book started to where it ended, I was surprised and intrigued. I'm very much look forward to the next book, to where Ruby will go and who she'll meet. She has a lot to learn about herself and her own abilities, and she'll need to find the strength to fight back or else she'll fall.

(I received a finished copy to review from Hachette Book Group Canada.)
Posted by Lindsay at 6:00 AM