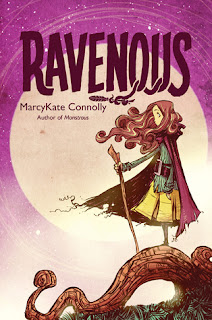 A witch has come to the city of Bryre. She travels in a hut that has chicken feet, and is ravenous for children. And once she gets what she desires, she never lets it go.

But when the witch captures Hans, Greta's little brother, Greta refuses to let her have him. The two strike up a bargain. Greta will retrieve something the witch desires in exchange for her brother's freedom.

To get the prize Greta must travel to Belladoma—a city where she was once held captive—which brings back terrible memories. With the help of a new friend, Dalen, a magical half-boy and half-horse, Greta embarks on the journey and tries to overcome both foes and her own weaknesses.

For fans of Monstrous and new readers alike comes the story of an epic quest and a heroine who will stop at nothing to save the one she loves most.

I'm so intrigued by this! I read Monstrous earlier this year and had no idea there was going to be another book set in the same world. I'm so curious as to what this book will bring, what characters will be introduced.
Posted by Lindsay at 12:02 AM