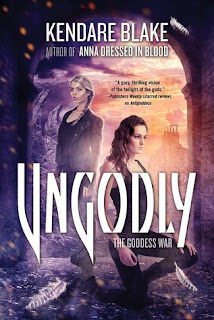 For the Goddess of Wisdom, what Athena didn't know could fill a book. That's what Ares said. So she was wrong about some things. So the assault on Olympus left them beaten and scattered and possibly dead. So they have to fight the Fates themselves, who, it turns out, are the source of the gods' illness. And sure, Athena is stuck in the underworld, holding the body of the only hero she has ever loved. But Hermes is still topside, trying to power up Andie and Henry before he runs out of time and dies, or the Fates arrive to eat their faces. And Cassandra is up there somewhere too. On a quest for death. With the god of death. Just because things haven't gone exactly according to plan, it doesn't mean they've lost. They've only mostly lost. And there's a big difference.

Ungodly is a conclusion, one hard-fought over. One full of pain, suffering, and death. The tension has built up, the intensity is thick in the air, and now Athena, Cassandra, and the others are racing towards the end. But will it be certain death? Or will some of them actually survive?

Everyone's voice, everyone's tone is rich with desperation. Frustration. Exhaustion. Anger. Sorrow. Fear. But there's a whisper of hope in the air. Of course there is hope. After all this time. After all the fighting, all the suffering, all the dying. Of course there's still talk of survival, of living. Why else would they continue their battle against the Fates, against fate? Athena. Hermes. Cassandra. Odysseus. Henry. Andie. They don't want to die.

The relationship between Athena and Cassandra will always be complicated, layered with shaky trust, skepticism, and dislike. From the start, they weren't friends. They were never going to be friends. Athena was too much like general looking for troops, Cassandra a wary teen girl who didn't want anything that wasn't her normal life. If they ever really became friends, it would ruin everything. Some characters become close, become friends, become more, because they need to. Because of the situation, because of their personalities, it works better that Athena and Cassandra are allies that dislike each other. Just because they're working towards a common goal doesn't mean they have to be friends. I do think they respect the other in some way, but become friends? Nope.

It's hard to review this without giving anything away beyond that fact that's the end. It's finally here. The ending. The conclusion to the sudden mortality that's struck seemingly immortal gods and goddesses. This is a trilogy of Greek mythology, of survival and betrayal, of angry girls kicking butt and defying fate. Making their own plans. Doing what they think needs to be done. A must-read for fans of action, complications, strong characters, and mythological twists.