Me on Tonight the Streets Are Ours 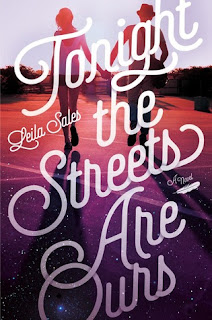 Seventeen-year-old Arden Huntley is recklessly loyal. Taking care of her loved ones is what gives Arden purpose in her life and makes her feel like she matters. But she's tired of being loyal to people who don't appreciate her—including her needy best friend and her absent mom. Arden finds comfort in a blog she stumbles upon called "Tonight the Streets Are Ours," the musings of a young New York City writer named Peter. When Peter is dumped by the girlfriend he blogs about, Arden decides to take a road trip to see him. During one crazy night out in NYC filled with parties, dancing, and music—the type of night when anything can happen, and nearly everything does—Arden discovers that Peter isn't exactly who she thought he was. And maybe she isn't exactly who she thought she was, either.

Tonight the Streets Are Ours is insight into a teenage mind, into her thoughts and opinions, the way she sees the world and the people around her. It's a look at truth, that what's on the surface isn't the same as what's inside someone, that the line between truth and fiction can blur so well you can't tell one from the other.

Arden is kind and loyal to those she holds close. But there aren't as many people in her corner as corners she's in. Her family? Distant. Her best friend? Keeping secrets. Her boyfriend? Too focused on his dream. No one's really there for her 100%. They are there, but not as much. And she doesn't necessarily call them out on it. She just waits, hoping they'll get the picture, that they'll stop and listen to what she wants and needs, but they don't. She's a bit of a doormat when it comes to certain people. Which is why Peter's blog resonated with her. In him she sees someone who also isn't as appreciated or cared for. Like her. Or rather, in his stories posted online, she sees someone like her. When they meet, things aren't what Arden thought they'd be like, and Peter isn't the person she thought he was.

There's a line that separates truth and fiction. That line can be so easily blurred, for example, when it comes to blogging. How does the reader know that what's posted, what's claimed to be true, is actually true? Why do we trust so quickly, so easily? Can we be swayed so easily by words that sound heartfelt and honest when they could very easily be complete fabrications? We all choose what to believe in, who to believe, but perhaps we shouldn't be so quick with handing our trust over in some cases. Especially when it comes to people we 'meet' or 'know' online.

As a fan of the author's previous book This Song Will Save Your Life but not a big reader of contemporary YA, I was somewhat interested in this. I'm on the fence when it comes to this book. I liked Arden's journey, how she figured things out about herself as well as other people. I think what I didn't like is something that I imagine most are guilty of, and that is being self-centered as a teen. A number of chaaracters, like Arden and her friends, seem like they don't care about anything that doesn't involve them. Which is typical for many teens. I'm certainly guilty of caring more about what someone could do for me or what was happening to me than what was happening to a friend or classmate. Maybe it's because a number of side characters didn't seem, to me, to have much substance, and so I just wanted to know what happened to Arden. I don't think this book and I really got along well. But if you are a fan of contemporary YA books like this one, one that seems rather true to teens and their opinions, their ways of thinking and acting, then feel free to give this one a read.

(I received and e-galley of this title to review from Macmillan through Raincoast Books.)
Posted by Lindsay at 6:00 AM