Fall has basically hit. There are leaves and bits all over the ground, and when it rains everything smells of wet puppy.

I've hit the point in time where there'll be some 3 reviews a week weeks because of so many books having the same release date. The upside? Lots of reading to do and lots of posts going up. The downside? So much reading to do. Plus I have no idea what I'll be reviewing in November and December. There aren't a lot of books coming out in those months, or at least ones I'm interested in reading. I might be filling those weeks with library reads or comics. Unless you can suggest some November and December releases for me to check out.

Reviews going up next week will feature Ungodly by Kendare Blake (Monday), Six of Crows by Leigh Bardugo (Wednesday), and A Thousand Nights by E.K. Johnston (Friday). :) 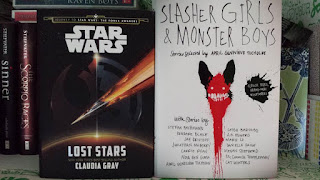