Me on A Madness So Discreet 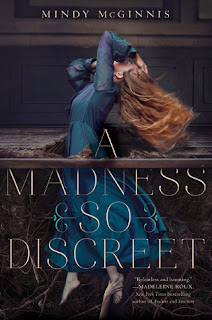 Grace Mae knows madness. She keeps it locked away, along with her voice, trapped deep inside a brilliant mind that cannot forget horrific family secrets. Those secrets, along with the bulge in her belly, land her in a Boston insane asylum. When her voice returns in a burst of violence, Grace is banished to the dark cellars, where her mind is discovered by a visiting doctor who dabbles in the new study of criminal psychology. With her keen eyes and sharp memory, Grace will make the perfect assistant at crime scenes. Escaping from Boston to the safety of an ethical Ohio asylum, Grace finds friendship and hope, hints of a life she should have had. But gruesome nights bring Grace and the doctor into the circle of a killer who stalks young women. Grace, continuing to operate under the cloak of madness, must hunt a murderer while she confronts the demons in her own past.

A Madness So Discreet is a haunting tale of sorrow and finding the power to escape the darkness. Grace must find herself, find her voice, if she wants to return to the light. Return to the world.

Grace is broken and beaten down, lost. Life in the asylum, living with the baby inside her and how it came to be there, has made her mute. Less than who she was. Until she shatters in a fit of hot rage and finds her voice. She finds herself in the darkness of the asylum cellar, refusing to let anyone hurt her again. It's almost unfortunate that it's in a cellar of filth and despair where she finds her voice, but there are some intriguing characters down there. Like a visiting doctor who, once he knows how insane she isn't, once he knows how intelligent she is, agrees to help her escape. What follows is Grace learning about crime, learning about motivation and means of committing acts of treachery and murder. What follows is Grace learning how to confront the devil in her past.

What's so striking is the treatment of the women in the asylum in Boston, the first one Grace is in. Their practices and "treatments" would now be considered cruel torture. They are dangerous, horrific practices that would only fracture the mind further instead of help it. The diagnoses would be made on presumptions of the women's thoughts and actions, believing their anger and rage at their husbands or others would be signs of madness and a need for them to be controlled. What passed for science then is almost completely considered garbage now. Science has progressed. The women considered mad in those days, young women like Grace, would now be considered women in need of help and support. Nowhere near insane. Compared to the asylum in Boston, the one in Ohio is almost like paradise.

How do we define madness? What is it that makes a person sane or insane? Is it their actions, their words, their preferences? At the point in time in which this book is set, is a woman mad for not wanting a husband, for wanting an education, to be a doctor or lawyer? Is a man mad for listening to flowers and caring for them? Is a person mad for wanting to exact revenge on those who harmed them?

I enjoyed the conflicts and clever banter between Grace and the doctor who takes her to Ohio. They're colleagues, in a way, that don't agree on certain topics, but they work well together when it matters. There were some twists I hadn't expected. It is about Grace and the doctor solving crimes but to me, it seems to be more about Grace coming to terms with a number of things. With life and loss. With madness, how those thought to be mad are the sanest of us. With the ability to continue on and not suffer in darkness.

(I received an advance copy of this title to review from HarperCollins Canada.)
Posted by Lindsay at 6:00 AM