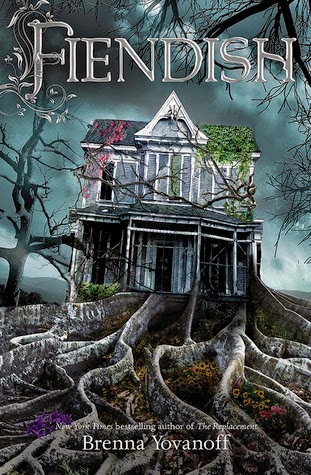 Clementine DeVore spent ten years trapped in a cellar, pinned down by willow roots, silenced and forgotten. Now she's out and determined to uncover who put her in that cellar and why. When Clementine was a child, dangerous and inexplicable things started happening in New South Bend. The townsfolk blamed the fiendish people out in the Willows and burned their homes to the ground. But magic kept Clementine alive, walled up in the cellar for ten years, until a boy named Fisher sets her free. Back in the world, Clementine sets out to discover what happened all those years ago. But the truth gets muddled in her dangerous attraction to Fisher, the politics of New South Bend, and the Hollow, a fickle and terrifying place that seems increasingly temperamental ever since Clementine reemerged.

Fiendish is a darkly magical tale of a girl hidden away and the changes she finds in her small town when she wakes up. The townsfolk know about those who live off in the woods, they know about their magic. And they fear it. But now that Clementine is free, something's coming, and it's not just that it's coming. It's that it's coming back.

Clementine's voice sounds a bit young, but it fits. The innocence in her voice makes sense. Locked away in a cellar for ten years, her body aging as her personality sort of stays the same. Her way of being rather blunt and matter of fact at times. It all makes sense. And perhaps that's why she's the only one who really wants to investigate what's happening. Because she doesn't know what's been going on, she's slightly set apart from the divide between the normal townsfolk and those like her and her cousin. Those with magic in them. She just has to know why she was locked away. And she just wants to do the right thing. She wants to help everyone. Especially Fisher.

Like Brenna Yovanoff's past books, the mood and setting are quite chilling, similar to The Replacement. The Hollow especially, filled as it is with magic and dark and dangerous things. With the magic everywhere, creeping out, reaching out, I was never sure what would pop up next, but I knew it would be frightening.