Me on Fragile Destiny 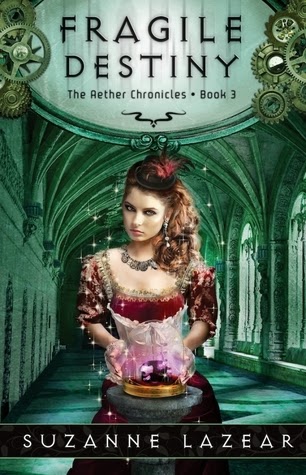 Noli and her true love V fear the worst if the Staff of Eris, a potent Otherworld relic, falls into the wrong hands. Broken into pieces and hidden in the mortal realm long ago, the staff bestows vast powers on whoever possesses it. Ciarán, the dark king, is trying to rebuild the staff, intending to use it to install a new queen. In a desperate effort to keep the Otherworld from falling into darkness, Noli and V plot the daring theft of a jewel Ciarán needs to complete the staff. But Ciarán is not so easily defeated. Through his devious machinations, he has set a plan in motion for a final showdown that will decide who rules the Otherworld once and for all.

Fragile Destiny is the third part of Noli's story, a story of epic and dangerous adventures. A story of mystery, intrigue, faerie magic, and unexpected revelations.

Noli and V are back, along with their friends and family (and manipulative enemies). They're still racing around, this time trying to keep the Otherworld safe (from those aforementioned manipulative fingers). They're still together, even if they are butting heads and arguing far more than usual. I was surprised at how often they clashed, how often they didn't tell each other everything and let things like stubborn pride and jealousy regarding Kevighn get in the way. I certainly didn't expect things to be easy for them, their lives are constantly wrenched out of their control and into someone else's, but I thought they trusted each other. Had more faith in each other after what happened in the previous books. And they have to work out their problems, they have to prove their strong enough to continue, or else everything they've worked towards will crumble.

Where there were airships and journeys and roaming in the second book, this one seems to spend a fair amount of time in the Otherworld. And that means complicated royal faerie court policies. That means spies and bodyguards. That means lies and tricks and plots. It becomes a rather dangerous setting, not as peaceful or magical as I'd expected. In the end I wasn't surprised. Again, I didn't think it would be easy for Noli and V to find what they were looking for.

It's very reminiscent of the previous two books. Adventure and tricky faeries, clashing personalities, quests and journeys. Noli's uncommon personality, V's intelligence, and Kevighn's unwillingness to let go of the past. I did assume that this was the end of a trilogy, but considering the ending, considering what is resolved and what isn't, what questions I still have regarding  I wouldn't be surprised if there's another book in the future.

(I received an e-galley of this title to review from Flux Books through NetGalley.)
Posted by Lindsay at 6:00 AM