Me on Kim Reaper Volume 1 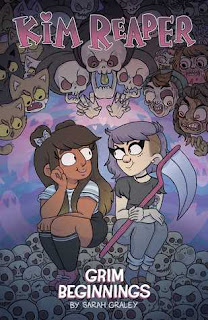 Kim Reaper Volume 1: Grim Beginnings is cute and complicated, a story about two college girls, one bubbly and hopeful and the other a grim reaper. And so, like college girls, they have to deal with a lot of things, like crushes and ghosts and dorm parties and zombie hordes, but they'll make it out in the end. Right?

Becka is cute and boisterous, spending her time in class staring at the back of current crush Kim's head. Dreaming of dates and hand-holding and maybe actually talking to her. But what Becka doesn't know, until she falls into a massive portal and follows her, is that Kim in a grim reaper-in-training, guiding souls to the afterlife in order to pay her rent and school fees. Becka gets it, she works part-time at a bakery, but a grim reaper? With all the death and possible danger? With the ghosts and the zombies? That might be too much for Becka. But there's still something about Kim. I liked their dynamic, their relationship. It was rocky at first, because of course it was. Both young women are opinionated and set in terms of what they like and what they don't, so I liked that it wasn't always easy-going.

The art is lots of bubbly fun with a hint of creepy, which comes from the ghosts and skulls and dead things Kim deals with. I like the differences between Becka and Kim, how it's obvious in their expressions and gestures and colour palette that Becka is the cute and fun one that's also not prepared to deal with any drama while Kim is the more serious one, determined to do her job because she actually likes it. I like the look of this comic, it makes me think of Saturday morning cartoons. With dead cats and zombies.

I do think this is the start of something fun, a cute story about two college girls and one's weird but well-paying part-time job. Who knows what will come next? More weird ghosts and hauntings? Kim and Becka going on another date? I found this fun, at times sweet and at times serious, and I'll be keeping an eye out for more.

(I received an e-galley of this title to review from Oni Press through NetGalley.)
Posted by Lindsay at 4:00 AM