Me on Horimiya Volume 5 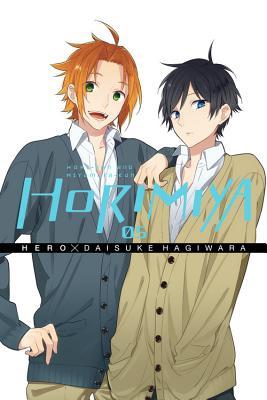 Hori and Miyamura are now officially a couple, and everyone knows it. But not everything's coming up roses for Miyamura, who's worried that people are talking about Hori behind her back. When his anxiety about being Hori's boyfriend reaches fever pitch, Miyamura drastically changes his look, which changes everyone's opinion of him all at once...

Horimiya Volume 5 is more of the same, more of Hori and Miyamura and their high school days. Their figuring out each other and themselves.

Things are different now! Hori and Miyamura are an actual couple instead of just dancing around each other with awkward feelings and unspoken thoughts. Miyamura's cut his hair, surprising everyone, in a childish move after overhearing people say that he and Hori didn't look believable as a couple. So now comes their days as a couple, which are pretty much like their days before. Going over to Hori's house for dinner, hanging out at school. Maybe some things are different, like this weird girl following Miyamura around school, or Hori wondering if Miyamura's ever going to try something with her, or the two of them being a little more vocal about their feelings.

This volume felt a little stilted, still the same overall story but the chapters didn't always connect they way they did previously. Now that they're open about being a couple, now that they're more and more honest about their feelings, about missing each other when they're apart, I do wonder how far their romance will go. I imagine the story will continue, moments of levity mixed in with teenage awkwardness and hard decisions, but maybe with a little more romantic feelings.