Me on The Nameless City 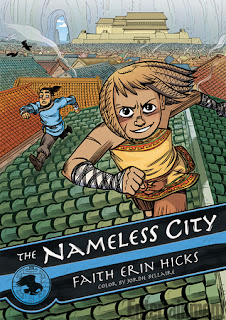 Every nation that invades the City gives it a new name. But before long, new invaders arrive and the City changes hands once again. The natives don't let themselves get caught up in the unending wars. To them, their home is the Nameless City, and those who try to name it are forever outsiders. Kaidu is one such outsider. He's a Dao born and bred--a member of the latest occupying nation. Rat is a native of the Nameless City. At first, she hates Kai for everything he stands for, but his love of his new home may be the one thing that can bring these two unlikely friends together. Let's hope so, because the fate of the Nameless City rests in their hands.

The Nameless City is the start of a smart, bright adventure, a story that begins in a city with as many names as people who live there with two young people who couldn't be more different struggling to understand each other.

Kai has the look of a kind, friendly boy. He's eager, he's excited to finally be near his father, to finally meet him, and he's curious about the happenings of the city. Of why it has ten thousand names and is nameless. He's bookish, more interested in learning and reading than fighting. He's sweet, naive, and the city can be cruel. Rat is a homeless street girl, a native of the city. She's angry at a number of people, specifically the Dao. She's angry at those who look down on her, who think they're better than her. And she has a right to be angry. Kai confuses her. He's the one Dao who looks at her as an equal, as a person, and it's hard for her to not see it as a trick of some kind. But it's not, and they need to trust each other if they want to save the city from certain enemies.

It's not a secret to some that I'm a fan of Faith's artwork. How expressive the characters faces are. The clear black lines. There's always a bit of fun in Faith's art. Here, the flips and tricks, the running and jumping over rooftops. The surprise on Kai's face. The anger on Rat's. The boredom of the guards while they look away from their work to discuss their vacation plans. The detail on all the buildings, the stonework and the tiled roofs. So much detail. And the colours done by Jordie Bellaire are somehow bright but also a little muted.

The Nameless City. It's a city caught up in politics and colonialism and seems to be unable to escape it. But the same can be said of other cities, of real life cities. Look at how far the Egyptians, the Greeks, and the Romans expanded their empires. Look at all the countries and islands that used to be British, French, Spanish, Portuguese, or Russian colonies. Look at the history of Byzantium/Constantinople/Istanbul. It seems to be a part of human nature to travel and expand, to find new lands to live in, and when the resources look appealing, to take it from its native inhabitants under some kind of illusion or through war, and then spend years worrying that someone could take it from them. The city is a collection of people, names, customs, and discrimination. Every new ruling country comes in thinking it's better, and currently in this city, it's the Dao who think they are better. But they're not.

What makes you who you are? In the case of this book, what makes someone Dao? What makes them a native of the Nameless City? Do they have to be born there? Erzi, the son of the General of All Blades, was, but he is also Dao. He's caught up in being Dao, in wanting to keep control of the city, and feeling as though the city is his because he was born there. Mura is not Dao, but she's been Erzi's bodyguard for years. She owes her life to him. Kai is Dao, born in the homelands, but currently his home is the Nameless City. Rat was born in the City, is a native, but seemingly has no say or control. But why? She was born there, so, like Erzi, the city is hers, yes? No. It's a twisted combination of colonialism, power, entitlement, and racism that is a struggle for many to overcome.

Is it where we are from, where are parents are from, or what race we are what defines us? Or is it our thoughts and values? Our actions? The connections we make with those around us? I think this book is rather smart when it comes to discussing war and empire, conquerors and victims. Of how easy it is to talk about leaving but how hard it is to put it into practice, how hard it is to stop a war. I would definitely recommend this to kids looking for adventure as well as to teachers looking for a visual way to teach empire and colonialism.

(I received an e-galley of this title to review from Macmillan through NetGalley.)
Posted by Lindsay at 6:00 AM