Me on A Fierce and Subtle Poison 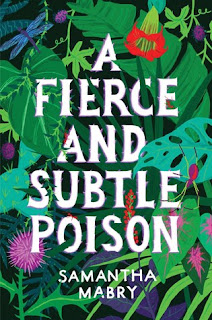 Everyone knows the legends about the cursed girl--the one the señoras whisper about. They say she has green skin and grass for hair, and she feeds on the poisonous plants that fill her family's Caribbean island garden. Some say she can grant wishes; some say her touch can kill. Seventeen-year-old Lucas lives on the mainland most of the year but spends summers with his hotel-developer father in Puerto Rico. He's grown up hearing stories about the cursed girl, and he wants to believe in her and her magic. When letters begin mysteriously appearing in his room the same day his new girlfriend disappears, Lucas turns to her for answers--and finds himself lured into her strange and enchanted world. But time is running out for the girl filled with poison, and the more entangled Lucas becomes with her, the less certain he is of escaping with his own life.

A Fierce and Subtle Poison is a dark and mysterious tale filled with secrets, a mixture of superstition and some very real, very serious, disappearances all wrapped up in tense, beautiful prose. Is there really a ghost in the house at the end of Calle Sol? Is there a witch who will grant wishes? Or is something far more sinister hiding behind its walls, behind the leaves?

Lucas is caught up between worlds, between his life is Houston and his summers in Puerto Rico. Between the opulence and money grubbing of his white father and the love and later abandonment from his Dominican mother. Between listening to the stories and legends of the señoras, the tales of heartsick nuns and cursed girls and a house that birds refuse to fly over, and thinking about the practical things he could do with his future. He doesn't understand his father's motives, his need to build fancy, pretentious hotels for rich people to stay in while the locals can only hope to work there, but he knows that it's his father's money that lets him go there in the summers, hang out with his local friends and get drunk almost every night. It's like he's in limbo, until he swears he sees the girl with green skin and grass for hair. Until the letters come. Until his wish is returned to him. Until he falls head first into poisoned plants and a poisonous girl.

The setting also brings this book to life. The warmth of the sun and the rage of the storms, the lashing wind and the pounding rain. The mosquitoes, the lush greenery that entices while hiding poison in its leaves. The very clear divide between the rich white hotel guests and the Puerto Ricans struggling to make enough money to leave. The stories mixed in with Lucas's words, the secrets and the ghosts and the hidden magics of the islands. The tucked away things that are kept alive by those who believe in the unknown and the impossible.

There's something about this book that might stick to you like honey or sap from a tree, dark and syrup-like. Something that seeps into you and lingers. Because of the stories and legends that race through the streets, because of the scientist's work, you're never quite sure of what Lucas sees, what's happening. Is the girl poison because of a curse? Or is it because of an experiment? Does Lucas hallucinate because of the poison, or is he seeing the truth behind the stories? I wanted to believe in the magic of this book, I really did. I love books that fiddle with truth and perception like that, books like this and The Walls Around Us and The Accident Season. A must-read for those looking for magical realism, for those looking for something a little different, a little dark and dangerous.

(I received an e-galley of this book to review from Algonquin through NetGalley.)
Posted by Lindsay at 6:00 AM