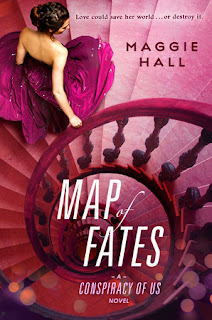 That’s how long it took for Avery West’s ordinary life to change forever: In two weeks, she discovered she was heiress to a powerful secret society known as the Circle, learned her mother was taken hostage by the Circle’s enemies, and fell for a boy she’s not allowed to love, just as she found out another was her unwelcome destiny.

Now, Avery crosses oceans in private jets to hunt for clues that will uncover the truth about the Circle, setting her mom and herself free before it’s too late. By her side are both the boys: Jack—steady, loyal, and determined to help her even at the expense of his own duty—and Stellan, whose connection to Avery grows stronger by the day despite her best intentions, making her question what she believes at every turn.

But at the end of a desperate hunt from the islands of Greece to the red carpet at Cannes comes a discovery that not only changes everything, but could bring the whole world to its knees. And now Avery is forced to face the truth: in the world of the Circle, no one is what they seem.

I'm looking forward to this next book. I like the sort of international intrigue that's centered around secret societies and puzzles and travelling around the world. I do wonder about Avery's relationships with Jack and Stellan, which one she'll fall for more. Which one she'll end up with. What will pop up from the Circle and ruin everything. With it being the second book, it's bound to end with a big surprise or explosion or something.
Posted by Lindsay at 12:02 AM