Me on The Chess Queen Enigma 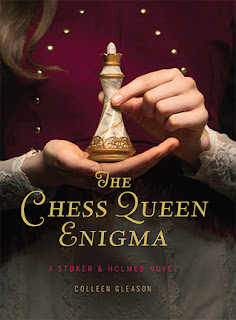 Evaline Stoker and Mina Holmes have reluctantly agreed to act as social chaperones and undercover bodyguards for Princess Lurelia of Betrovia, who has arrived in London to deliver a letter that details the secret location of an ancient chess queen that's been missing for centuries. But when the letter—which will heal a centuries-old rift between England and the Betrovians—is stolen out from under Evaline and Mina's watchful eyes, the two girls are forced into a high-stakes race to ensure they find the chess queen before anyone else does.

The Chess Queen Enigma is mysterious and thrilling, yet another adventure of Stoker and Holmes to get wrapped up in. Winding their way through ballrooms and alleyways, in both the best and the worst company London can offer a young woman, they must solve the mystery first and prevent something dangerous from happening.

Mina and Evaline are back to solve another mystery, back to rely on the separate strengths of brains and brawn. Back to argue about which piece of the mystery needs solving first. They will always be at odds, which is one reason why they work so well together, even when it looks like they're not working together at all. The challenge each other, push each other, make each other stop and think before continuting on recklessly (although that doesn't always work). Left to their own devices, they have no one to bounce ideas off of, no one to discuss and squabble with. They're both head-strong and stubborn young ladies, they both have their quirks and flaws, and they always get the job done in the end.

There's only so many times I can repeat myself in terms of the inventiveness of the setting, the illegality of electricity and the over-abundance of steam-powered vehicles, contraptions, and clockwork machines. The way that London is layered in this world, the slums hidden below the more desirable and more expensive buildings, kept straight in the air by large balloons. It has a way of keeping the secrets of its residents hidden from sight.

I'm surprised at how invested I was in the story right from the start. In the past two books, I've struggled to suspend my disbelief in the idea that both Holmes and Stoker existed at the same time and in a London that had abolished electricity. I didn't have that problem here. Perhaps I was far too interested in the mystery. It's an intriguing mystery. Where is the chess queen? And the questions that have stretched across the series. Who is the Ankh? Who is Pix? Where are the vampires? There has to be another book, considering the rather shocking and surprising way this one ended. There just has to.