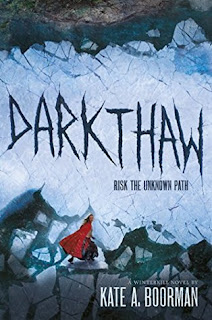 For as long as Emmeline can remember, she's longed to leave the isolated world of the settlement and explore the wilderness that calls to her in her dreams. And now that the Council has fallen, she will finally, finally get that chance. With First Peoples guide Matisa at her side, Emmeline rallies a brave group to join her on her quest into the unknown, including her beloved Kane and his two younger brothers. But the journey soon proves far more dangerous than Emmeline anticipated—with warring clans, slavers, colonists, disease, and natural disasters seemingly at every turn. After putting so many lives in danger, she starts to doubt everything she once knew. Did she make the right choice to leave the settlement—and can her relationship with Kane survive the ordeal? Matisa insists that to set things right and to fight the evil that is bringing all this danger and turmoil to the forest, Emmeline must journey to Matisa's people—even if that means leaving Kane behind.

Darkthaw is a dangerous journey through unforgiving terrain. It's a walk down a path dreamed of by unexpected. Em has lived a surprisingly sheltered life in the settlement. She was not prepared for the dangers that roam free outside its walls.

Now Emmeline is free. Now she is on a journey, moving forward into the world towards the home of some of the First Peoples. Matisa's people. Matisa, who dreamt of her and found her in the shadows. The two girls are connected. Em knows they must stay close. Their dreams are telling them something, that something is coming. But the path is more trecherous than Em and Kane expected, than Matisa and her family expected.

The setting is still as it was. A settlement in the middle of nowhere. The forests that contain their secrets. The sounds of the river. But there is more to the world than just Em's settlement. The Dominion is out there, moving westward in search of land to map and move into. But is that a threat to Em and Matisa's plans? Are they really just looking for places to settle, or are they wanting more? Em comes to discover that the world is a dangerous place, much more so than she'd expected. But does she have the strength to continue her journey? Will she still want to continue down this path?

With the Dominion moving further westward, it's like history repeating itself. Em's world is like a distant, once ruined but now rebuilding version of ours. The First Peoples know that war machines and weapons ruined the world, which is why they separated themselves. They are wary of what comes now, what might come in the form of mapmakers and settlers. If the past will repeat itself. If the streams and rivers will fill with sickness and death. All are now cautious, waiting, watching. Wondering what the dawn will bring.

This is the result of Em's decision to leave the settlement. She knows she wants more than what's available to her. She needs to leave. There's more in the world that she needs to see, places that she needs to go. This is Em learning the truth about the world, that it was far safer, in some ways, in the settlement. But she would gain nothing from staying. She had to leave, had to learn, had to discover which path she'd chosen. With the events of this book and the ending, the happiness and the sorrow, I'm curious as to what will come in the last book.

(I received an advance copy of this book from the author.)
Posted by Lindsay at 6:00 AM