It rained this week, which was just the best. So cool and breezy outside. Of course, with rain comes wet puppy smell. And wow, does she ever smell when she's soaking wet.

I won't be around next week because I'll be volunteering in Vancouver at the public library, like every August. Hopefully I won't miss too much while I'm away from my computer during the day. ;)

The election campaigning has kicked off here. It probably won't be mentioned on the news in the US much, or any other country, but it'll fill the airwaves here. Has it been mentioned anywhere outside of Canada that there's an election going on?

No reviews next week because, as mentioned above, I won't be around to keep track of posts or tweets. Check back next Saturday for which reviews will be going up the week of the 17th. :) 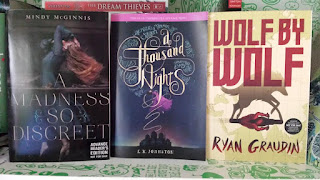