Me on A History of Glitter and Blood 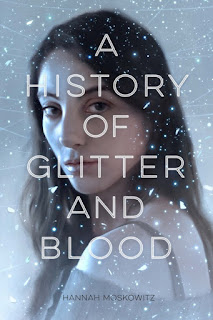 Sixteen-year-old Beckan and her friends are the only fairies brave enough to stay in Ferrum when war breaks out. Now there is tension between the immortal fairies, the subterranean gnomes, and the mysterious tightropers who arrived to liberate the fairies. But when Beckan's clan is forced to venture into the gnome underworld to survive, they find themselves tentatively forming unlikely friendships and making sacrifices they couldn't have imagined. As danger mounts, Beckan finds herself caught between her loyalty to her friends, her desire for peace, and a love she never expected.

A History of Glitter and Blood is at times magical and gruesome, a story of what war leaves behind, of what war makes us do in order to survive. A story of family and friendship, of the ways we bind ourselves together.

Beckan, Josha, Scrap, Cricket. When the war starts, they're the only ones to stay in Ferrum. Why would they leave their home? But staying behind means surviving bombs. Staying behind means joining together. Staying behind means heading underground for work. It's not easy for any of them. In no way is anything any of them goes through easy. It's harsh, painful, distasteful. But it's what they do in order to survive. And when they're not working? They pretend as hard as they can, they laugh and love and look forward to the day when the war will be over. But when it ends, how it ends, is it what they expected would happen?

The narrator is unreliable. The story is told in a mixture of fictional prose and journal accounts, of what the narrator knows and witnessed and what the narrator imagines happened when they weren't in the room. It's an intriguing way to tell the story. It gives it authenticity, makes it sound real. Makes every cut and bite and fever dream feel that much more real. Like this war actually happened.

This book highlights all the parts of war, uncovers the secrets often left unspoken by survivors. What happens to those who stay, what decisions they are forces to make. What pieces of themselves they're forced to give up. If after reading this you're filled with all kinds of uncomfortable feelings, if you're all squicked out inside, then the book did its job. It's not a happy book, it's not meant to cheer you up. This book is all harsh reality and the day-in day-out of those living with war every single day, the stories you never hear about on the news. The stories you should hear about.

This is fairy tale, but one without the usual magic. The fairies do have glitter, but it's to keep the gnomes from eating too much of their limbs and bodies. This is a messy book about war, politics, racism, family, and love. It's a slap in the face and a punch in the gut. This won't be for everyone, but if you find yourself interested, read it for the characters. Read it for Beckan, for Scrap, for Josha and Cricket. Read it to learn what their lives become, to learn who they become. Read it to learn what war does to them, does to us.