*waves from melted person puddle* Hi there. Summer came back this week with a real slap in the face. I'm trying to cope with the heat, but it isn't easy when the puppy wants to go out and snuffle around in the grass and sit in the blazing sun. She's slowly getting better on the obedience training, sitting and lying down and not chewing on shoes. Hands still seem to be fair game, though.

What's everyone reading this weekend? I'll be trying to get through Cloud Atlas and The Bone Clocks. My mother borrowed them from the library and has passed them on to me since I said I was interested, but she couldn't finish them. Seeing the Cloud Atlas movie ruined the book for her and The Bone Clocks is too weird. We'll see how I fare over the holiday weekend (Monday's a holiday for most of Canada).

Does the same happen to you with book movies? I try to have read the books first, but sometimes being patient is hard. I saw The Maze Runner movie recently, I read the book a while ago and sort of remembered what happened. I thought it was ok, it was mostly like the book. Except for the telepathy, and some other things that I've forgotten since I've read it.

Reviews going up next week will feature The Accident Season by Moïra Fowley-Doyle (Tuesday) and A History of Glitter and Blood by Hannah Moskowitz (Friday). :) 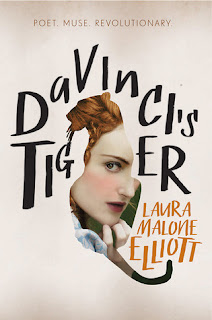 Da Vinci's Tiger by Laura Malone Elliot (e-galley from HarperCollins/Edelweiss)
Posted by Lindsay at 8:00 AM