Me on The Leveller 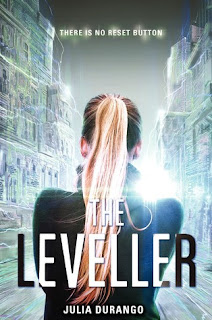 Nixy Bauer is used to her classmates being very, very unhappy to see her. After all, she's a bounty hunter in a virtual reality gaming world. Kids in the MEEP, as they call it, play entirely with their minds, while their bodies languish in a sleeplike state on the couch. Irritated parents, looking to wrench their kids back to reality, hire Nixy to jump into the game and retrieve them. But when the game's billionaire developer loses track of his own son in the MEEP, Nixy is in for the biggest challenge of her bounty-hunting career. Wyn Salvador isn't some lazy kid looking to escape his homework: Wyn does not want to be found. And he's left behind a suicide note. Nixy takes the job but quickly discovers that Wyn's not hiding—he's being held inside the game against his will. But who is holding him captive, and why? Nixy and Wyn attempt to fight their way out of a mind game unlike any they've encountered, and the battle brings them closer than either could have imagined. But when the whole world is virtual, how can Nixy possibly know if her feelings are real?

The Leveller is danger upon danger, upon even more danger. In the MEEP, Nixy is suspicious of everyone and everything. Nothing can be trusted. But in a virtual world, is there anyone or anything you can really trust? And what if the biggest liar of them all is out in the real world?

Nixy is clever and wily. She's practical and intelligent, always watching out for herself, always planning. In her under the table work as a leveller she doesn't have time for illusions or lies, which is amusing. The MEEP is all about illusion. Nixy knows that, she knows that while it can be glamourous it's not real. She's able to see the disappointment in it, in waking up and discovering that the lush paradise you crafted isn't real, and she has plans for her future beyond it. She doesn't have time for a billionaire's son's sulking in a fantasy world. Or so she thinks.

How do we know when something is real and when it isn't? What if the world around us isn't real, what if it's an illusion made up by computers and manipulated brain waves? How do we then determine what's real? How far does that reach? Is the pain felt in that illusion real pain? Are the emotions felt real? Pain, anger, sadness, hunger, fear. Does this leave us open to someone else's control? And how will we know when we're back in the real world?

This is an intriguing mix of virtual reality, adventure gaming, and perception. It's all about who to trust and when to trust yourself, when to trust your instinct to run or fight when the space around you is peaceful and welcoming. With what was revealed and how the book ended, I'm curious as to where the next book will go and who will be in it.