Me on A Book of Spirits and Thieves 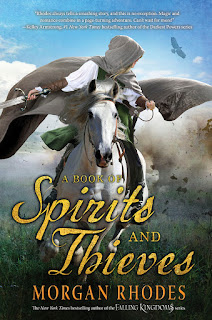 Modern-day Toronto: It's a normal afternoon in her mother's antique bookshop when Crystal witnesses her little sister Becca collapsing into a coma after becoming mesmerized by a mysterious book written in an unrecognizable language. Ancient Mytica: Maddox Corso doesn't think much of it when he spots an unfamiliar girl in his small village. Until, that is, he realizes that she is a spirit, and he is the only one who can see or hear her. Her name is Becca Hatcher, and she needs Maddox to help get her home. Modern-day Toronto: Rich and aimless Farrell Grayson is thrilled when the mysterious leader of the ultra-secret Hawkspear Society invites him into the fold. But when he learns exactly what he has to do to prove himself, Farrell starts to question everything he thought he knew about family, loyalty, and himself.

A Book of Spirits and Thieves is mysterious and magical, complex and complicated. Here are two vastly different worlds that are somehow connected, two worlds full of secrets and magic, and what happens in one could greatly impact the other.

Crystal and Becca are two very different siblings. Different personalities, different goals. And suddenly in two different situations. For Crys, she's been left to discover why a book put her sister in a coma, why her mother and aunt are keeping such important secrets from her, and why her father left their family. With her mother refusing to answer her demands, it's up to Crys to poke around in things she doesn't understand. But Crys doesn't know what she's about to come up against, or that Becca isn't in a coma. Not really.

Farrell is rough, bitter, rich, and bored. He doesn't do much of anything beyond drink, flirt, and attend secret society meetings every so often. But then the leader invites him further in and Farrell now knows what he wants. But at what cost? Farrell doesn't have much, doesn't do much. Not after his older brother's death. It left him confused. But now? He knows what he wants. It's difficult to like Farrell, what with his callous attitude towards life, his parents, girls. Everything.

Maddox is an unwilling pawn, a con man's prisoner, forced to use his bizarre but sort of magical powers in order to rob superstitious people of their coin. But then he sees a spirit, a girl who talks strangely and dresses strangely. Then he ends up in a plot to take down a goddess. Then his whole world is turned upside down. Without any real control over his magic, all he can do is hope he's trusted the right person and follow them.

There is danger in each world, in Toronto and in Mytica, and both must be navigated carefully if anyone hopes to survive. Mytica sounds like a land in a fantasy book, full of magic and kings and dangerous goddesses, but I liked the chapters set in Toronto more. It gave the real world a magical twist, gave weight to secrets, to truths and lies. To books.

I do wonder if I've missed anything because I haven't read the Falling Kingdoms books. I wonder if there are any references or names that appear in both series. That being said, I didn't feel that lost. As two out of the three points of view are in Toronto, I felt that I could keep track of what was going on and who to watch out for. There were a number of twists and turns, some I expected and some I didn't, and I found myself rushing to find out how it would end. I rather enjoyed this, and I imagine fans of the first series would as well. I'm looking forward to the next book.