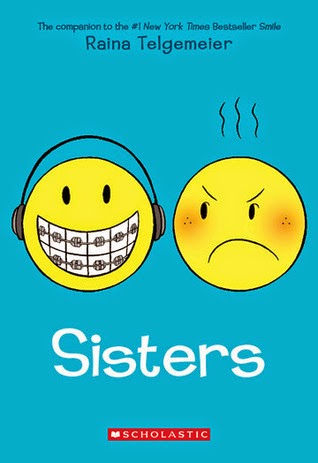 Raina can't wait to be a big sister. But once Amara is born, things aren't quite how she expected them to be. Amara is cute, but she's also a cranky, grouchy baby, and mostly prefers to play by herself. Their relationship doesn't improve much over the years, but when a baby brother enters the picture and later, something doesn't seem right between their parents, they realize they must figure out how to get along. They are sisters, after all.

Sisters is fun, funny, and realistic. Not necessarily continuing on from Smile but certainly continuing on telling stories from her years growing up in San Francisco, this book shows the highlights and lowlights of growing up with siblings.

Raina and Amara are sisters with about five years between them. When she was little, Raina had it all planned out. One day she'd have a sister and they'd play together, they'd enjoy doing the same things, and they'd hang out together. It would be awesome. But things didn't really work out as she'd hoped. Instead, what Raina gets is Amara, a stubborn girl who doesn't always sugarcoat what she says and loves gross things like snakes. You'd think they'd finally bridge the gap between them through drawing and art, but no.

I really like Raina's artwork. A fair amount of the story comes across in the different expressions on the faces of her and her siblings and parents. When they're excited, angry, sad, confused, worried. Everyone has depth. The travel backgrounds are also amazing, the glimpses of the Rocky Mountains and the hot desert her mom drives them through. And it was easy to tell which was their present day road trip and which was flashbacks to a younger Raina, how Amara came into her life, how their relationship developed over those early years.

I found this to be an honest and authentic look at Raina's relationship with her younger sister. As I read this I was reminded of my own childhood with my own sister. The fights we would have, the differences between us. Looking back now I realize a lot of that stemmed from us being different people, but you never think about that when you're younger. You just wonder why they don't like the same things you do. They're your sibling. You have the same parents. They're supposed to like the same things, right? This book is definitely a must read for fans of Raina's previous books and for anyone who's ever had to 'put up' with a troublesome sibling (or sibling-type person).

(I received a copy of this book from Scholastic Canada.)
Posted by Lindsay at 6:00 AM