Me on The Fourteenth Goldfish 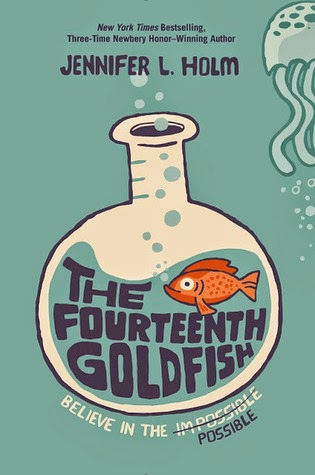 Eleven-year-old Ellie has never liked change. She misses fifth grade. She misses her old best friend. She even misses her dearly departed goldfish. Then one day a strange boy shows up. He's bossy. He's cranky. And weirdly enough... he looks a lot like Ellie's grandfather, a scientist who's always been slightly obsessed with immortality. Could this pimply boy really be Grandpa Melvin? Has he finally found the secret to eternal youth?

The Fourteenth Goldfish is intriguing and thoughtful, a curious and clever look at change, at science, at family, and at possibility.

Ellie is a bright but somewhat lonely girl. She isn't the biggest fan of change, and change is happening all around her. And then her grandfather appears and looks pointedly younger than the last time she saw him. I like Ellie, she's curious about things. She wants to know reasons behind why things happen and change. And here comes science in the form of her bizarre, intelligent grandfather, opening the doors of possibility.

On the other side, away from science, are the clashes between her mother and her grandfather. Neither takes the other seriously. There's never any talk of compromise. Her grandfather thinks her mother is flighty, he doesn't see any merit or value in the arts, and he thinks she'd be better off as a scientist. Meanwhile, her mother sees a foolish man who's extremely inflexible and doesn't understand how the world works. Each one treats the other like a child. It's hard for Ellie, to be sure. Especially when she starts to show an interest in science. I got the feeling that every time that happened she was worried her mother would hate it. They're both different people, but very similar in the way they're both extremely stubborn.

I love how this book talks about science in terms of possibility. That anything is possible. That idea transcends science, art, math, geography, plumbing. But in terms of this book, in terms of science, it's great. It makes it seem so much more accessible. Away with the complicated formulas and tedious experiments. All you need to do is wonder, is observe, is question if it is possible, and go from there. Don't be afraid. Believe that it's possible and the world will open up in front of you.

I found this book fun and interesting and I had a hard time putting it down. It's a fun story, an honest story, and one that I would definitely recommend to anyone young or old.