Me on Playing with Matches 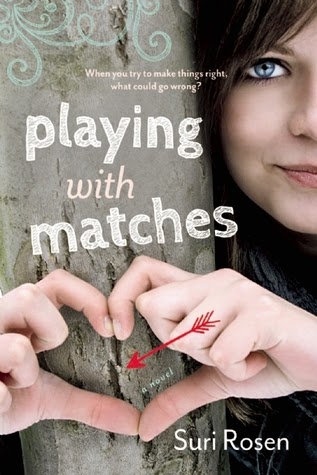 When 16-year-old Raina Resnick is expelled from her Manhattan private school, she's sent to live with her strict aunt — but Raina feels like she's persona non grata no matter where she goes. Her sister, Leah, blames her for her broken engagement, and she's a social pariah at her new school in Toronto. In the tight-knit Jewish community, Raina finds she is good at one thing: matchmaking! As the anonymous "MatchMaven," Raina sets up hopeless singles desperate to find the One. A cross between Jane Austen's Emma, Dear Abby, and Yenta the matchmaker, Raina's double life soon has her barely staying awake in class. Can she find the perfect match for her sister and get back on her good side, or will her tanking grades mean a second expulsion?

Playing with Matches is funny, witty, and clever. This is one girl's unexpected journey through the hopeful single Jewish community of Toronto. It has its perks, but it also has it drawbacks, and Raina has to be careful or else everything will fall apart at her feet.

Raina's just trying to survive this new and unwanted life of hers. She's trying to survive her sister's sadness and anger, trying to figure out where she fits in. Trying to figure out how she's suddenly a matchmaker. She's the kind of girl who wants to help out, but most of the time it's because she's been roped into it. She has her negative qualities. She judges nearly everyone at face value, she has secrets in her past that she'd rather stay hidden. But when it comes to family, like Leah, she'll try as hard as she can to make it all better.

She certainly falls into matchmaking by accident. It's certainly not something she'd planned for herself in the future. And it's not easy. It doesn't take her long to realize that it's more than just matching up two single people and hoping they'll have something in common beyond not wanting to be single any longer. You have to know people in certain ways, know what they want and what they don't, know what they really need from a partner, and hope you know someone who will fill that role. Raina has it extra hard because she barely knows these people and because of all the pressure they've put on her to save them from being single. As she says, she's only sixteen. What does she know about dating and romance that they don't?

I thought the pacing was great. It was hard for me to put this down once I started reading. This book was just so much fun to read. The characters, Raina's friends and family, were interesting. They sounded like regular people with regular problems. The Orthodox Jewish community is one I'm not familiar with and I enjoyed reading about it (I'm not Jewish, so I don't feel I can comment on the accuracy of the customs and religion portrayed here). With a clever and trying heroine and a quirky cast of supporting characters, this is definitely a must-read for fans of contemporary stories and realistic fiction.

(I received an e-galley of this title to review from ECW Press through NetGalley.)
Posted by Lindsay at 6:00 AM