Day 7. More Q&A's! This time with dragons. Because dragons are cool. :) Also, we've reached the halfway point. Hopefully you've been enjoying the posts this year. Feel free to comment on the Q&A posts and reviews. And maybe comment on the intro/giveaway post with any suggestions for next year's event. :)

E.K. Johnston lives in the magical city (perhaps, you never know) of Waterloo, Ontario. She wears many hats, some of which include archaeologist, writer, reader, bookseller, wanderer, dreamer, Christian, and internet junkie. And frequent Tumblr-reblogger of The Lord of the Rings/The Hobbit, Iron Man/Captain America/Avengers, and Doctor Who gifs. Her debut YA, The Story of Owen, came out on April 1, 2014 from Carolrhoda Lab. You could find out more about Kate at her blog, but more often than not you can find her on Tumblr and on Twitter (@ek_johnston). :) 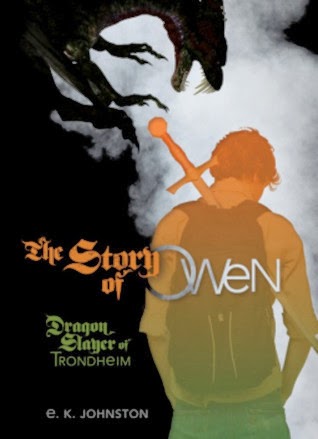 Q: One of the things I noticed most in The Story of Owen were the Canadian references, mainly because they would make me chuckle to myself every time. It feels like a very Canadian book. Was that your intention? As a Canadian author, is there pressure to write books set in Canada?

A: It was quite deliberate! I knew I wanted to set the book in Canada right out of the gate, and as I was writing what is now Chapter 2 (originally it was Chapter 1), and Siobhan and Owen have their O Canada! dilemma, I decided I was going to make it as Canadian as I possibly could. I didn't feel pressured to do that (in fact, I was a little worried that an editor might make me take out some of the Canadian things), but I do think that it's important to have teen books set in Canada. Often when I read an alternate history or a dystopia, I spend a lot of time wondering what's going on in Canada. I wanted more than crumbs and shout-outs in my book (much as I love crumbs and shout-outs, don't get me wrong!).

Q: How important was it to portray small town living accurately with Trondheim and the people who live and work in and around it?

A: It was very important to me. Trondheim is an amalgamation of the town I am from and the town where I went to high school, and I wanted to capture the quirks and characteristics of small-town living. In the process I learned that everyone's definition of "small-town" is different, but I like to think I've captured the 1000-3000 population demographic. :)

Q: Another stand out part for me was the slowly growing friendship between Siobhan and Owen, his relationship that slowly grew without any romance. It seems rare in YA, a male-female friendship that doesn't result in some kind of romantic leaning. Was that on purpose?

A: This was another very deliberate choice. I made a list of things that I didn't want in the book, and kissing was the second item on the list. There was, if you can imagine it, even LESS romance in the early drafts. I was kind of aiming for Tolkien-esque friendships (of the sort between Sam and Frodo, for example, or perhaps Faramir and Pippin would be a better example), that run deep and are based on so much common experience that romance seems secondary by comparison. Of course, then Sadie showed up and my priorities shifted a bit, but generally speaking I am very pleased with how that aspect turned out.

Q: The way this story is told, as Siobhan telling the tale of Owen and his family coming to Trondheim, reminds me very much of Tessa Gratton's books. I'm very conscious of the fact that I'm being told a story. Why bards? Why the return to the bardic arts and recounting tales of heroes and villains?

A: Originally, Siobhan's job was much closer to sports-casting than it was to immortalizing Owen in song. She was meant to get him sponsors and the like by making him and his job appear cooler than they really were. The story shifted away from that, but by then the music was very much a part of Siobhan's character. Since I was bringing the Nordic style of dragon slaying with me into the book, it made sense to bring the Nordic style bard as well, though Siobhan's a bit more sarcastic in her record keeping. When it came to the writing, though, I wanted it to be told like Siobhan was telling it to you. I often get comments that it sounds like I'm speaking directly to my readers, and that makes me happy, because that's really what I was going for.

Q: The dragons here aren't good dragons, not so much 'helpful for society' dragons. They ravage the land so they can eat and survive. Would you consider yourself pro- or anti-dragon? (I ask, knowing how often you reblog Hobbit-related posts on Tumblr)

A: We're back to me and my lists! I also made a list for all the things the dragons wouldn't do: no riding, no taming, no talking, no intelligence, no co-habitation. I wanted them to be animals, but not give them any "human" qualities at all. That said, I would not consider myself anti-dragon. I have read a LOT of dragon books over the years, and making my own variations on them was a lot of fun. In Siobhan's world, there is no such thing as a good dragon (she gets into that in the Draconobardicon on tumblr), and anything that portrays dragons in a good light is downright dangerous. Fortunately, we have the luxury of fictional dragons.

Q: Will there be more of Owen and Siobhan, of her recounting the heroic tales of a young man with a sword in his hand and a backpack on his back with last night's math homework in it?

A: There will! I have another book, THE STORY OF OWEN: PRAIRIE FIRE, out next spring with Carolrhoda. I am very excited to share the next bit of Owen (and Siobhan!)'s story with everyone.

Thanks so much to Kate for stopping by. If you want not-good dragons, an awesome male-female friendship, and lots of Canadiana, check out The Story of Owen now! :)
Posted by Lindsay at 6:00 AM

Email ThisBlogThis!Share to TwitterShare to FacebookShare to Pinterest
Labels: blog event, Canada, dragons, Q and A, YA