Day 13. Today's post is like a sneak-peek into an upcoming book, because it's not out until September. :)

Kate A. Boorman is a writer from the Canadian prairies. She was born in Nepal and grew up in the small town of Rimbey, where she developed a fondness for winter. Kate has a MA in Dramatic Critical Theory and a resume full of an assortment of jobs from florist to qualitative research associate. She lives in Edmonton, Alberta with her family, and spends her free time sitting under starry skies with her friends and scheming up travel to faraway lands. WINTERKILL is her first novel. You can find her on her website or on Twitter (@KateBoorman). 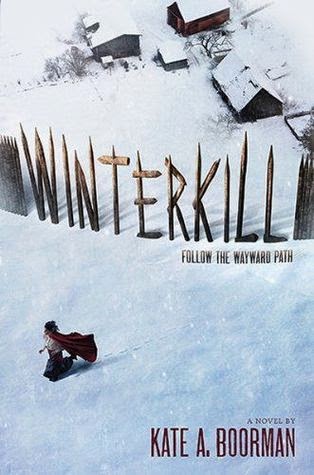 I've read that a distinguishing motif in Canadian literature is our relationship with our physical environment. If it's true that Canadians have a preoccupation with our landscape and climate, I have to assume it has something to do with us knowing, deep down, that we are at its complete and total mercy.

Does that sound melodramatic? Maybe a bit. Actually, as I sit here in my t-shirt, staring out the window at the snow-caked streets, eating a pineapple from Hawaii, that statement feels totally over the top. It's pretty easy to convince myself that my existence relies mostly on my internet provider.

But stripping away my fossil-fuel-created luxuries reveals an uncomfortable reality. This land, while heart-breakingly beautiful, is incredibly harsh. It is something to admire and survive. The first people here knew that: they developed an intense understanding of the landscape and climate in order to flourish. The arriving immigrants had to learn—the hard way.

Even with advancements in technology our existence is not guaranteed: frosts and droughts threaten crops and livestock, subzero temperatures threaten human lives, the wild and vast backcountry threatens those who wander off course.

A landscape that can sustain life and take it in dramatic ways fascinates me. That kind of reality shaped the world of my novel, WINTERKILL.

When I reimagined my frontier world, I had extremes in mind: the captivating beauty of our natural landscape, the severe weather, the trepidation of venturing into 'uncharted land'.

I wondered how it would look if my characters were existing in an environment that was both unfamiliar and unrelenting. How might they deal with the challenges of long, brutal winters, unknown natural poisons, predators they’d never encountered?

And what if I went a step further: what would it be like if there was one specific deadly unknown that threatened their existence? How would that define the rules by which they live?


Honesty is always telling the truth, following settlement rules like completing your duties, attending settlement events, staying inside the fortification borders. Bravery is doing what’s asked, taking risks that benefit the whole and not jawing on about it when you do. Discovery is using the brains Almighty gave us to find ways to improve our lot—without risking everyone’s safety...
…Pa says when we arrived there were also three religions, but the ungodliness of the malmaci banded people together in one understanding of the Almighty, and of how the virtues can keep us safe.

The physical traces of history on our land were also on my mind as I created my world. Here in the west, those traces exist mostly in story and small artifact. Dwellings and settlements were made of what was available. On the sweeping prairies and in the vast forests, those materials do not withstand time; they have decayed and crumbled, been absorbed back into the landscape that birthed them—the sod, the trees, the river mud.

The ephemeral nature of that intrigues me. I wondered how faint traces of an unknown history might look? How would they capture a newcomer's imagination?


The Lost People were First Peoples, and they were Taken by the malmaci before our ancestors even arrived. The stories tell it that way, and Tom and I find their ancient traces—tools, bones—along the riverbank all the time. Only . . .
Only deep down in my secret heart, I’ve always felt their absence as though it were a presence. As though they’re still here, somehow—just . . . lost. Tom’s the only one who knows I call them the Lost People, but he doesn’t tease me about it.
Course, I don’t tell him they call to me.

And how about the mystique of journeying into unfamiliar territory, discovering new things? Surely this factors into that Canadian motif. By and large, the intriguing wild is at your doorstep here. The potential to discover new things, and, in so doing, discover yourself, is present constantly. In the world of WINTERKILL, Discovery is a virtue, but my main character wrestles with what pursuing Discovery truly means. How far do you go to discover what lies beyond? What might it cost?


I look off through the brush, following the swept-aside branches.
It’s a path.
The grasses underfoot are tamped down by . . . footsteps?
But it can’t be a trail. Gatherers and trappers don’t come out this far anymore, haven’t for years. Any trails made by the first or second generation would be long overgrown.
My heart races but the little voice in my head slows me up. Could be an old trail, still used by animals. Deer? No. The branches are broken off too high for deer.
Looks as though a person’s been through.
All right. Think.
The right thing to do would be to return and tell Council. They might send a group of armed Watchers to come explore.
But I can’t. I’m out too far: it’s Wayward, plain and simple. After last night, there’s no telling what Brother Stockham might decide about me. I have to turn around right now and keep quiet, or risk it alone.
Takings in the daytime are rare.
I listen to the woods again. There’s nothing but the tinkling of les trembles and the sparrow trill. But underneath it all the Lost People are calling to me, urging me forward.
I’ll just follow it a little ways.

The world of WINTERKILL is fantasy; it is frontier life on some kind of disaster-amphetamine.

My penchant for creepy things encouraged me to place danger and fear in the realm of the otherworldly. My love affair with this landscape means my main character clings to the hope that a land that takes will also give; a land that kills will also nourish.

My Canadian-ness, though, gives me the sense that we are not so very far removed from that wild and unpredictable existence.

Thanks so much to Kate. I know it's a ways away, but keep an eye out for Winterkill this September! :)
Posted by Lindsay at 6:00 AM