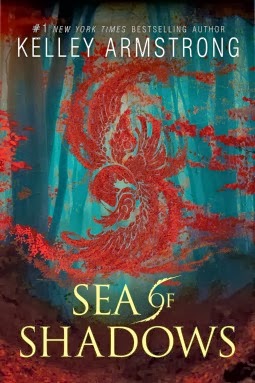 In the Forest of the Dead, where the empire's worst criminals are exiled, twin sisters Moria and Ashyn are charged with a dangerous task. For they are the Keeper and the Seeker, and each year they must quiet the enraged souls of the damned. Only this year, the souls will not be quieted. Ambushed and separated by an ancient evil, the sisters' journey to find each other sends them far from the only home they've ever known. Accompanied by a stubborn imperial guard and a dashing condemned thief, the girls cross a once-empty wasteland, now filled with reawakened monsters of legend, as they travel to warn the emperor. But a terrible secret awaits them at court. One that will alter the balance of their world forever.

Sea of Shadows is mysterious and curious. It begins in a dark and misty world that slowly fills with death and dangerous creatures, and it's up to two sisters destined to calm the souls of the dead to uncover the secrets. But how much will their journey cost them?

Moria and Ashyn are like two sides of the same coin. While one watches over the Forest of the Dead, the other ventures into it to find the souls that need quieting. While they are similar in looks, they differ in personality. Moria is more outspoken, more business-like. She is the warrior of the pair, determined and strong, willing to do battle but kept back by custom. Ashyn is calmer, like a healer. The desire to fix problems and help is strong with her, and often her emotions get the best of her.

Instead of a feud between the sisters there is understanding. There is no evil between them, only their purpose and their journey. It's rather refreshing to come across siblings in an epic fantasy that aren't at war with each other. I imagine that as the series goes on, they will be pulled apart only to come back together stronger than before.

The world-building is interesting. There isn't a lot of info-dumping at the beginning. Instead, it appears in the form of stories or legends as the plot progresses, revealing the secrets that hide in the shadows and the mystical creatures the sisters and their companions face. Over the course of the book I could see how some parts of the world were Asian-inspired.

Epic fantasy is often hit or miss with me. I found this interesting enough to keep me reading, I wanted to know what happened to Moria and Ashyn, where they were headed when they were separated and who they would come across. It reminded me of Soulbound and Graceling. It felt a bit slow in some spots, but I imagine fantasy fans will enjoy the start of this new trilogy.

(I received an e-galley of this title to review from Random House Canada through NetGalley.)
Posted by Lindsay at 6:00 AM