Day 2. The first Q&A of the event features a returning author! :)

Amanda Sun currently lives in Ontario with her husband and daughter. When she's not busy writing YA, she's either reading YA, watching Japanese dramas, making fun geek crafts or sewing costumes for anime and fantasy conventions. Her Twitter profile pic used to claim she's Fluttershy from My Little Pony (but I've seen her without the pink hair). Her debut YA novel, Ink, came out June 2013, following the prequel e-novella Shadow. The second in the Paper Gods series, Rain, comes out June 24, 2014. You can find her at her blog and on Twitter (@Amanda_Sun). :) 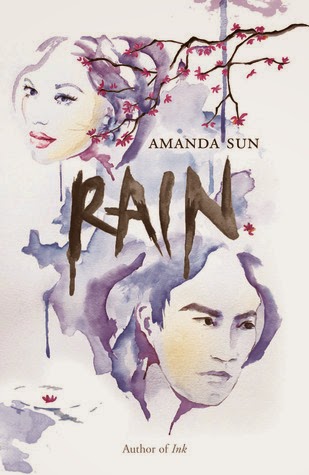 Q: Considering how Ink ended, what Katie and Tomo discovered about the ink and Tomo's kami abilities, I imagine Rain will answer some but ask even more questions. Not a question, I know, but... *serious face* please say there will be questions answered.

A: Yes! RAIN is the book of many answers. More will be explained about Katie, Tomo, and Jun's abilities, as well as the Kami throughout Japanese history. I can't say too much, but I think it should answer a lot of the questions that INK poses. There are explanations coming, I promise! :D

Q: There's a lot being said now on diversity in YA, on having characters, especially main characters, be people of colour. While Katie isn't Japanese, almost all of the other characters in Ink and Rain are. How important was it for you to portray Japan and Japanese culture and mythology accurately, or as accurately as possible? Do you think/hope you got it right?

A: Having lived in Japan in high school, and having family and friends who are Japanese, accuracy was so important to me. I didn't just delve into the journals I kept while in Japan, but also checked in with my friends living there now to make sure I was as close to current slang, fashion, and day-to-day life as I could be. I even ended up going back to Shizouka while researching to try and get everything just right.

I think it's so important when we're showing diverse characters in YA that we show real people and not stereotypes or caricatures of the culture. I believe authors we owe it to our readers and our community to do as much research as we can, and to handle the issue with respect. I wanted a cast of Japanese characters to show a variety of personalities, to show that not all Japanese people fit into the boxes that society might think they do. Yuki, Tanaka, Tomo, Jun, Ishikawa....I hope all of them show that everyone in Japan is an individual, and that we have more in common as people than we have differences.

I did choose to make my MC non-Japanese, and the reasoning behind it was to open an outsider's window into Japanese life. I wanted a MC who could experience all this for the first time, who could stand out physically and see what it feels like to be a minority and to make cultural blunders as she tries to discover who she is and how she fits into her new life. I also really wanted to have an Asian male love interest, because I don't think they get enough page-time, and woot for multicultural romance! So I hope that INK makes Japan accessible to readers, and that YA will continue to expand the roles for people of colour and minorities into main, non-token roles.

Q: Katie has her moments of awesome and flailing, and Tomo has the brooding hero aura down, but side characters are also important. Will there be more of Yuki and Tanaka in Rain? Will we learn more about Shiori?

A: Yes and yes. ^_^  I think that Katie and Tomo both grow in RAIN, although there is still some cultural flailing, but we see Katie trying to get her life in order, and Tomo trying to take responsibility of his powers. There's lots more to Yuki and Katie's friendship in RAIN, as well as the relationship between Yuki and Tanaka. Shiori also has a lot of growing to do in RAIN, as does Ikeda. So, in short, more plot for everyone! *hands out side plots*

Q: Any suggestions for those wanting to learn more about Japanese culture? Any books, anime or manga (as exaggerated as anime and manga can get about high school life)? Any books you've read recently that you would recommend?

A: I always recommend Hiromi Goto's HALF WORLD and DARKEST LIGHT to anyone who might have enjoyed INK. Goto's books are cinematic, haunting, and beautifully written. They also have gorgeous illustrations, and the plots make me think of Studio Ghibli movies. I'm so inspired by her. While they aren't set in Japan, they feature Japanese and LGBT characters, and enough creepy monsters to keep you up at night.

As far as sources for Japanese culture, it can be really tricky, since they do get exaggerated in media just as our high school lives do. A good manga/anime choice for realistic school life might be KARE KANO (His and Her Circumstances). Because the manga/anime focuses on the contemporary romance, the school life portions are pretty close. You see a lot of the background info such as uniforms, cleaning the classrooms, school festivals and activities, and home life. Another good one could be OTOMEN, which is about a tomboy girl and a boy who likes to sew and cook. It's a good example of how traditional roles in Japan are still difficult to break away from, although the younger generation can be much more accepting of change. And 1 Litre of Tears, which deals with the true story of a girl's rare illness--the school life and viewpoints of the teachers and students are really interesting.

Of course, I love the school-based dramas Hana Yori Dango, Hana Kimi, and Majou no Jouken, but I wouldn't rely on them for accuracy. ^_^

Q: Any spoilers at all for Rain? Besides kissing and delicious-sounding Japanese food?

A: How did you know RAIN had those? ;) It also has kendo, yakuza, and drawings coming to life! I can't say much, I'm afraid, but you will learn more about Tomo and Jun's abilities, as well as exactly how and why Katie is tied into all this. I hope you look forward to it! ^_^

Q: Will you be going flower viewing when the cherry blossoms bloom this spring? (if winter is over by then? ;))

A: Every year I find some cherry trees and make a homemade picnic to do flower viewing with my family ^_^ However, we may have to skip this year as we have a new puppy. Last year, the wait to get into the park was over 3 hours, so unless we can find a sakura grove closer to the house, we may have to pass this year. But I'm going back to Japan this summer to finish Paper Gods #3, so don't feel bad for me! :) I'll be going to some very cool places in Japan and blogging them for all of you to enjoy, so please keep an eye on my tumblr! (amandasunbooks.tumblr.com)

Thanks so much for having me on the blog! :D

Thanks so much to Amanda for stopping by. If you're interested in Japanese mythology in your YA, check out Ink now and Rain at the end of June! :)
Posted by Lindsay at 6:00 AM

Email ThisBlogThis!Share to TwitterShare to FacebookShare to Pinterest
Labels: blog event, Japan, paranormal, Q and A, romance, YA