One of the biggest cases of book adoration pre-release that I've seen this fall has been for Erin Morgenstern's debut novel The Night Circus (I think the other is for Michelle Hodkin's The Unbecoming of Mara Dyer). I recently won a finished copy of The Night Circus from the awesome people that run ChaptersIndigo's Twitter feed during a trivia round about 2 weeks ago. It sounded magical and romantic and mysterious, book bloggers and industry pros I know on Twitter are gushing like mad, and a news desk (I don't remember which) dubbed her "the next J.K. Rowling" (which I have issues with, mostly in terms of how much unnecessary pressure that puts on the author and because someone clearly made the obvious 'magician/wizard' connection without stopping to think). 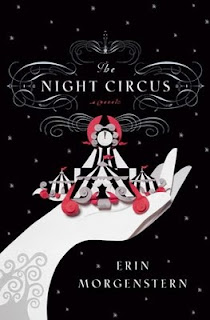 Even thinking about this book takes me somewhere magical, somewhere mystical, a place where the impossible lives and turns dreams into reality. I want to love this book when I start reading it, I want to devour it, to be moved by it, to wander around as the sun goes down in hopes of finding Le Cirque de Rêves.

Then on Monday morning I saw Random House Canada tweet this: "To celebrate the book launch of The Night Circus join us in downtown TO & Van Sept 13, 8am Yonge/Dundas Square & Robson Square." How awesome does that sound?? :) (Of course, if you're just finding out about this now and you wanted to go, you're probably upset. Oops.)

Of course, this meant getting up kinda early (for me). At 6am.

I was tweeting during the event (thank you, new smartphone), and here are a selection of pictures. Hope you enjoy. :)

They had about 200 copies to give away. Yes, give away. For free. No strings attached. Some people said no, which was weird, like they thought there was a catch but there wasn't. They just wanted people to take the book, read it, tell their friends, and get their friends to buy it. And take the free little bangs of popcorn. So cute. :)

And they got a guy on a unicycle. That's awesome. People will see that and go, "What's the deal? Oh, hey, it's a book," then walk over and take a copy. :)

It didn't take long for them to hand out all the copies and break out the coupons. $5 dollars off at the Chapters just down the street (or the Chapters they were outside of in Toronto earlier this morning), plus it's 30% off in stores. So, instead of $32 it's about $17. Plus tax. In Canada. Books cost more in Canada.

They picked a good spot, at Robson Square in the heart of downtown Vancouver, right across the street from the art gallery. It was cool and cloudy this morning, though, but I think they got the message out. That this book is going to be awesome.

Michelle at Just a Lil' Lost wrote a blog post about the event in Toronto. You can read it here. :)

Check back tomorrow for a new post on The Night Circus. :)
Posted by Lindsay at 1:40 PM