Me on The Unbecoming of Mara Dyer 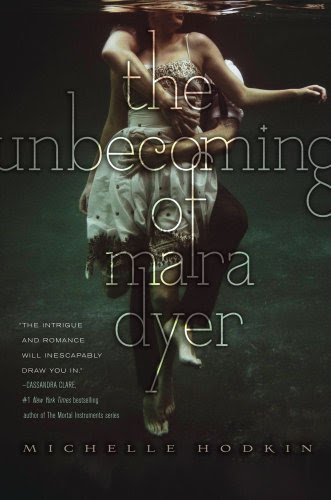 Mara Dyer doesn't think life can get any stranger that waking up in a hospital with no memory of how she got there. It can. She believes there's more to the accident she can't remember that killed her friends but left her unharmed. There is. She doesn't believe that after everything she's been through, she can fall in love. She's wrong.

The Unbecoming of Mara Dyer is a mysterious and compelling debut with question after question arising in the reader's mind. Unreliable, Mara Dyer attempts to navigate her life after a brutal accident, attempts to put together the fractured pieces of herself. The reader is left floundering, head barely above the water, but Mara herself is in the same boat. How can we trust her when even she doesn't know what happened? When anything could be a lie, crafted by Mara's own mind to hide the most fragile part of her psyche from the absolute and honest truth?

Attempting to understand this book defies logic and reason. I felt the plot was more revealed than explained, more discovered than understood. There are things, little moments, people, places, that cropped up over and over, that made me wonder, made me question Mara and what was happening to her, where it was happening to her.

And Noah. Such a contradiction. Rumours of him being easier than a two-piece puzzle roam and wander through the school hallways and yet his eyes are full of Mara, he's all about Mara. What totally gorgeous and supposedly self-absorbed guy does that? Nothing is as it seems in this book.

As I write this, it's after midnight on September 17th. I honestly want to re-read this book in a week and see what I think of it then. So I'm going to.

September 25: I've read it again. It's still mysterious, still thrilling, and still fills my mind with questions. We are given one side of a story, the story of a girl suffering after a tragedy and with gaps in her memory, but is it the truth? How are we supposed to trust her? Mara Dyer isn't even her real name.

Every event that occurs, every word that's spoken, every seemingly insignificant detail is suspicious. Everything is suspect until the truth is discovered, until we learn who Mara Dyer is, and what happened that night her friends were killed. Memory, perception, truth and lies. This book will make you question it long after you turn the last page. You might even question the world around you, wonder if what you're experiencing is reality and not fiction.

(I received an advance copy of this book from a friend, she ended up with an extra and sent it to me in exchange for a different book.)
Posted by Lindsay at 12:02 AM