In My Mailbox is a bunch of weekly fun hosted by Kristi over at The Story Siren. :)

The sis is back, we saw awesome comedy in East Vancouver last night, went to the library this week, and I got some amazing book mail. :)

I also went to one of the Random House Canada fall previews. First time something like this has been open to the public (supposedly). Surprisingly, there were two in BC. Shocking. Nothing ever comes to BC. ;) I didn't do an event post, it wasn't a YA lit-specific event, but some YA books were wholeheartedly endorsed, like The Death Cure and There is No Dog.

I'm so excited about some upcoming book event fun in the next few weeks. Smart Chicks stop on the 1st, lunch in Seattle with Tahereh Mafi on the 4th (if I don't get a picture with her, I will get Caitlin to smack me), and back down to north of Seattle on the 12th for a HarperCollins Dark Days of Supernatural tour stop. If you're going to the LA, San Francisco, Chicago, or New York stop of Tahereh Mafi's pre-pub tour, let me know. I'm interested in doing a group post with people sharing highlights of each stop. Or if you know someone who's going, direct them my way, ok? :) 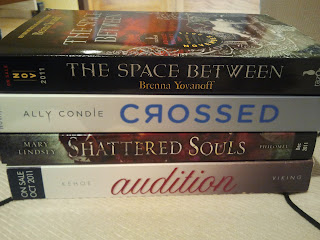 Received from Penguin Canada to review:
Crossed by Ally Condie (ARC) (I started this the other day then backpedaled and re-read Matched first.)
The Space Between by Brenna Yovanoff (ARC)
Shattered Souls by Mary Lindsey (ARC) (I have to wait a little to read this one, though. Caitlin's borrowing it.)
Audition by Stasia Ward Kehoe (ARC) 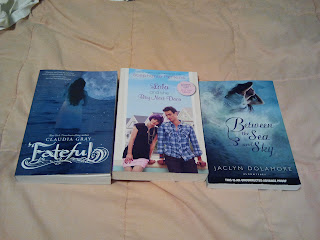 Bought:
Fateful by Claudia Gray (Now, there's a reason I bought this now and not on October 12th and that's because Canada seems to have gotten the paperback "international edition" instead of the regular hardcover, so it's $11 instead of $20. And this isn't even for me. Ashelynn, whom I adore talking to on Twitter, really wants this book, and so this is my very early Christmas present for her. Plus I get to read it.)

Borrowed from Caitlin (WhatchYAReading.net):
Between the Sea and Sky by Jaclyn Dolamore (ARC)
Lola and the Boy Next Door by Stephanie Perkins (ARC) (I caved. She offered to let me borrow it weeks ago but I said no because the wait for my copy would be hell. Since it's less than 2 weeks until it comes out and I've got it pre-ordered along with The Unbecoming of Mara Dyer, I think I'm good. And I'll so be re-reading it when my copy arrives.)

Borrowed from the library (no picture of these):
Tempest Rising by Tracy Deebs
Zombies vs. Unicorns edited by Holly Black and Justine Larbalestier
Revolution by Jennifer Donnelly
My Love Lies Bleeding by Alyxandra Harvey (the UK version of Hearts at Stake, I got this version because it's the paperback)
Blood Feud by Alyxandra Harvey
Demonglass by Rachel Hawkins
And 8 romance novels I've been meaning to find/read at some point.

To review: Carrier of the Mark, The Butterfly Clues, Crave (I really need to read these NetGalley books), The Pledge, Crossed, The Space Between, Shattered Souls, Audition, Fateful, Between the Sea and Sky, and Lola and the Boy Next Door. Maybe Tempest Rising, I don't know. What do you guys want me to review? What book do you want to see a review of?
Posted by Lindsay at 12:02 AM

Email ThisBlogThis!Share to TwitterShare to FacebookShare to Pinterest
Labels: In My Mailbox, romance, YA