Me on The Traitor's Kiss 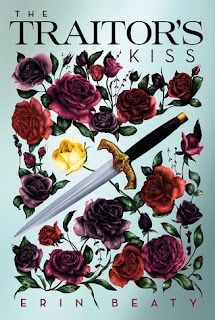 With a sharp tongue and an unruly temper, Sage Fowler is not what they'd call a lady―which is perfectly fine with her. Deemed unfit for marriage, Sage is apprenticed to a matchmaker and tasked with wrangling other young ladies to be married off for political alliances. She spies on the girls―and on the soldiers escorting them. As the girls' military escort senses a political uprising, Sage is recruited by a handsome soldier to infiltrate the enemy ranks. The more she discovers as a spy, the less certain she becomes about whom to trust―and Sage becomes caught in a dangerous balancing act that will determine the fate of her kingdom.

The Traitor's Kiss is a story about a girl looking for her own place in a world were she doesn't want to act like other girls, a girl who ends up involved in mystery and intrigue, but in some ways this book doesn't work.

Sage is an intelligent young woman. A non-traditional young woman, considering the comments on her temper, her temperament, and her upbringing. She's wild and bold, opinionated. Given the chance to instead apprentice with the matchmaker instead of be married off is something she's welcome to do, but she's dismissive of almost everything and everyone around her. Like the work of the matchmaker, whose plots and plans are full of subtlety that Sage often misses. Like the young ladies they're escorting off to the brides, young ladies Sage considers to be flighty, foolish, and spoiled. It's not that she has to like them, she's welcome to not want to marry or spend her days bearing children, but the fact that she's rather quick to judge them spoiled makes her sound snobbish.

The book is told in other points of view. Some from the soldiers that Sage and the matchmaker come across, some from the main enemy. I won't name names, just in case I give something away. The point of view of the soldiers was different, they somewhat highlighted how the kingdom and its military were run. The soldiers come across as practical, determined, and focused, not necessarily interested in escorting a group of young women on their way to be married.

I do think this book had promise, there was something about it that felt different from other fantasy setting with no magic stories. There were moments of humour, of intrigue. Some more world-building would've been nice, I was sort of lost as to why matchmaking was so important in this kingdom. But when a group of antagonists was only described by their dark skin tone and how their tattoos were foreign, and the ways in which Sage was resentful towards the other girls, put me off. It felt somewhat similar to The Remnant Chronicles and The Winner's Trilogy, but again, there were moments were character descriptions were racist and characters were unnecessarily cruel.