Me on The One Memory of Flora Banks 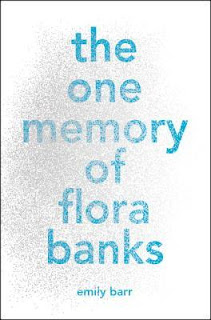 Seventeen-year-old Flora Banks has no short-term memory. Her mind resets itself several times a day, and has since the age of ten, when the tumor that was removed from Flora's brain took with it her ability to make new memories. That is, until she kisses Drake, her best friend's boyfriend, the night before he leaves town. Miraculously, this one memory breaks through Flora's fractured mind, and sticks. Flora is convinced that Drake is responsible for restoring her memory and making her whole again. So when an encouraging email from Drake suggests she meet him on the other side of the world, Flora knows with certainty that this is the first step toward reclaiming her life. With little more than the words "be brave" inked into her skin, and written reminders of who she is and why her memory is so limited, Flora sets off on an impossible journey to Svalbard, Norway, the land of the midnight sun, determined to find Drake. But from the moment she arrives in the arctic, nothing is quite as it seems, and Flora must "be brave" if she is ever to learn the truth about herself, and to make it safely home.

The One Memory of Flora Banks is an intriguing look at memory and perception, at a girl who has no short-term memory but can suddenly remember a kiss, at what makes her feel brave, but it missed the mark with me.

Flora is kind, sweet, and friendly, mostly because much of her personality is stuck at the age at which the amnesia first took over her memories. She's a ten-year-old in a seventeen-year-old's body. Because of her type of amnesia, she struggles to keep recent memories in her head. Her life is full of gaps and confusion, notes and post-its and messages scrawled on her arms in thick marker. But then she kisses Drake, her friend Paige's boyfriend, and hours later she can remember it. Days later, she can remember it. This new memory sets off a journey for Flora, away from her home and towards Drake, but there are certain things that some people have been keeping from her.

The premise of this book is interesting, I was drawn in by Flora and her lack of memories of the last seven years. At the idea that she could suddenly remember something. At the idea that something was being kept from her by someone close to her. Reading this isn't like other books, Flora's life happens in spurts and moments, full of repetition and reassurances. But it just didn't click with me, not completely. I felt both interested and not, curious about where Flora would go while waiting for something else to happen. While this didn't completely work out with me, I do think some will enjoy this, those who like contemporary stories with gentle intrigue and mystery about them, those who like lost and unreliable narrators.

(I received an advance copy of this title from Penguin Random House Canada.)
Posted by Lindsay at 4:00 AM