Me on Princess Princess Ever After 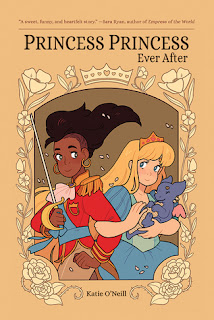 When the heroic princess Amira rescues the kind-hearted princess Sadie from her tower prison, neither expects to find a true friend in the bargain. Yet as they adventure across the kingdom, they discover that they bring out the very best in the other person. They'll need to join forces and use all the know-how, kindness, and bravery they have in order to defeat their greatest foe yet: a jealous sorceress, who wants to get rid of Sadie once and for all. Join Sadie and Amira, two very different princesses with very different strengths, on their journey to figure out what happily ever after really means -- and how they can find it with each other.

Princess Princess Ever After is sweet and magical, a brand new fairy tale that draws from tradition and then spins it around on its head. It's a story about strength and weakness, about characters who don't fit into expected boxes and would rather do things their way.

Amira is a take charge kind of girl. With her sword and her trusted unicorn Celeste, she's ready to roam the land and search for people to help. Because that's what she's looking for. Something to do, people to assist. Action. Not what she left behind in her family's kingdom. Sadie is sweet and kind, a compassionate girl. She's all about listening to problems and helping people. Even though she's stuck up a tower. After Amira helps her down, Sadie's ready to travel, but her past creeps up on her. Her anxieties and insecurities creep up on her. And she'll have to face her fears if she wants to finally be free.

The artwork is bright and fun, it fills the page with lots of rounded corners and expressive faces on the characters. It's very clear whenever Amira is embarrassed or upset, with Sadie is laughing or crying. And both girls don't look like traditional princesses. Amira has brown skin, walks around in pants with a sword at her hip, and has the biggest fancy shoulder decorations on her military-style coat. And she has some kick-butt hair. Sadie is in a bright blue dress, she wears a crown in her blonde hair, and she's fat. She also has a chubby blue dragon at her side. They don't look like princesses, but they look like princesses.

There's so much humour here, so much fun being poked at traditional princes saving princesses tales. From flowers appearing at Amira's intro and Sadie calling her on it to an ogre smashing up a town because of his stifled creativity. I do wish there was more to the story, though. In some ways it feels short. I really hope kids read this and see a different side to fairy tales and to princesses in particular. That they can be strong, wielding swords and fighting evil. That they can be weak, afraid and alone. That they can be tall or short, thin or fat, black or white or any skin colour. That a princess can fall in love with another princess. I would recommend this to anyone, especially kids looking for new fairy tale stories, kids who love the no-nonsense attitude of Elizabeth in The Paper Bag Princess.