Me on Some Favourite Things (3)

Hi! These recap of favourite things posts seem to be popping up ever couple of months, so I think I'll keep on doing them. :) 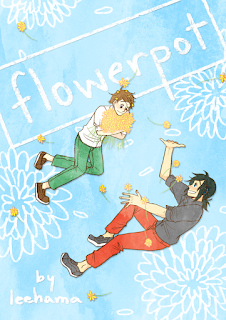 Let's start with another webcomic rec. Flowerpot by leehama! This is the story of Ben, a college student with an unusual disease. He's super kind, super friendly, and super quiet, preferring to stay in the background and avoid attention. When Ben was a kid, he was patient zero for a disease called Fleurine when flowers appear and sprout from people's bodies. It wasn't so bad for Ben, his condition means he sprouts dandelions from his scalp, but it was different for others when flowers burst from their skin, from their ears and eyes. When petals would fill their lungs. This is a world where people fear flowers, where people avoid them and those with Fleurine because they don't want to be infected. Ben's happy living a quiet life, but an encounter with a photographer with a project and a plan starts to change Ben's way of thinking, of what it means to be a 'flowerpot.' This comic is super cute and fun, the artwork is bright and colourful, and it's rather diverse in terms of race and disability and illness, both visible and invisible. Here's a link to the start of the comic. :)

Speaking of comics, VanCAF! I love going to VanCAF, seeing what people are doing in terms of their own art and original characters as well as fan art. As someone who can be super visual, who likes comics and isn't that artistic on their own, I really enjoy it. It's the act of creating art, of telling a story through a medium other than straight prose. And it's a chance to support local artists as well. I've been looking forward to going for months and it's finally happening this weekend.

Because we're heading deeper into spring now (where I live) and summer is approaching, here's a quick shout-out to taking walks. I don't know what it is, but it turns out I like going for walks. Especially on my own when I can stick headphones is and listen to music and go for easy-going walks in the sunshine. This sort of started last year when Pokemon Go came out, but walks on their own are also fun. If there are parks or green spaces near you, check them out when it's nice out.

I'm behind on so much Netflix watching, I promise I'll get to you one day, season 2 of Sense 8. And I think I'm pretty much on board for the new Star Trek: Discovery show after seeing that trailer earlier this week. Oh, sci-fi. Kid me loved you so much.

Considering these posts keep happening, see you again with other list of fun things in July! :)
Posted by Lindsay at 4:00 AM