Me on The Wizard's Promise 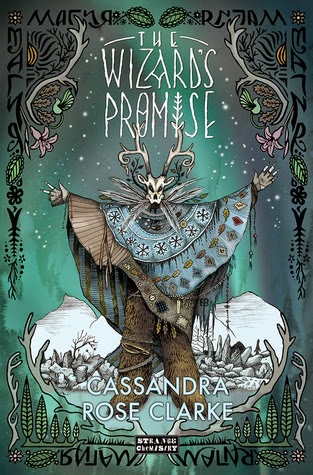 All Hanna Euli wants is to become a proper witch, but unfortunately she's stuck as an apprentice to a grumpy fisherman. When their boat gets caught up in a mysterious storm and blown wildly off course, Hanna finds herself further away from home than she's ever been before. As she tries to get back, she learns there may be more to her apprentice master than she realized, especially when a mysterious, beautiful, and very non-human boy begins following her through the ocean, claiming that he needs Hanna’s help.

The Wizard's Promise is a curious journey across troubled waters and into unfamiliar territory. Away from everything that's familiar, Hanna has to keep her wits about her and figure out what's going on, what magic is coming for her, or she won't make it back home.

Hanna spends a fair amount of the book frustrated with a number of people, but she doesn't spend her days moping and complaining. Well, some of her days are spent like that, but more are filled with work and determination. As much as she wants to learn to be a witch, to use her power properly, she wants to get back to her parents and their village. And so she works hard, she's rather pro-active in that regard. It's rather unfortunate for her that some of the people around her are so tight-lipped.

It's a rather frustrating adventure for Hanna. Sure, she wants to explore the world, learn about magic, but this wasn't meant to be an adventure. And when Kolur doesn't tell her where they're headed, or why they won't be going back right away, or what's going on, it makes for an annoyed main character as well as an annoyed reader. I wanted to know what was going on as well, but with multiple characters being deliberately vague page after page, chapter after chapter, I began to lose interest. Not telling her the truth only makes Hanna more angry and more likely to do something that could ruin their plans, but it's their own fault for not telling her and treating her like an idiot who wouldn't understand. I imagine there's a lot more they haven't bothered to tell Hanna.

The world in this book is an interesting one. Talk of magic is normal, pirates who roam the seas are commonplace. What struck me most as original and also practical was how in one village Hanna couldn't quite understand the written language or what they placed monetary value on. Because those things would change, depending on how far your travel and in which directions. No two villages would be exactly alike, speaking the same language or using the same currency. The mysteries involved in the magic were also interesting.

It's a curious one, Hanna's journey across the seas. There are moments of action and mystery, of anger and dangerous magic, but also moments of quiet, of learning. It might not have made for a fast-paced read, but those quiet times for Hanna weren't necessarily wasted. But there were times when I found myself bored, wondering when Kolur would take Hanna seriously, when he would get off his high horse and actually respect her instead of ignoring her. If he really needed her, he should've told her more. I'm curious as to where the second book will go, if Hanna will have a better adventure than this.

(I received an e-galley of this book to review from Strange Chemistry through NetGalley.)
Posted by Lindsay at 6:00 AM